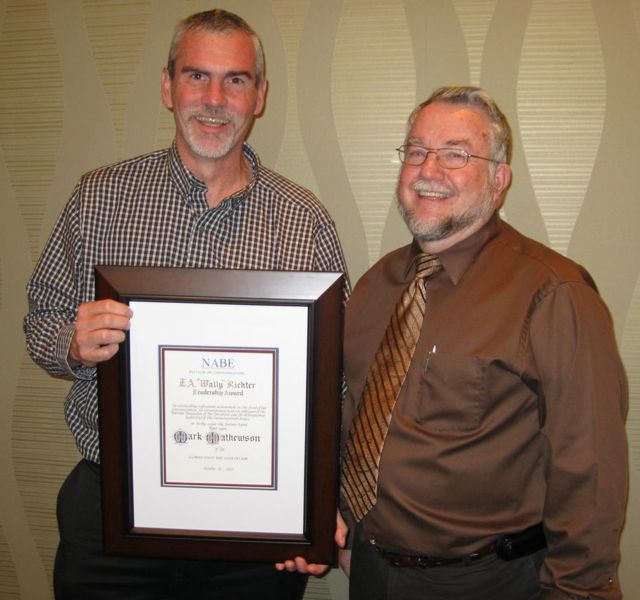 Mark Mathewson, Director of Publications for the Illinois State Bar Association, has received the E.A. “Wally” Richter Leadership Award from the National Association of Bar Executives.  This award, given no more often than once annually, was given to Mathewson at the annual workshop of bar association communicators held October 21 in Nashville, Tennessee.

The Richter Award is the Communication Section’s highest honor and is presented for outstanding achievement in the field of communications, extraordinary service to colleagues in NABE, and distinguished leadership of the communications section.  Mathewson is the 29th recipient of this recognition. A certified association executive (CAE), he served for a number of years on the leadership council of the NABE Communications Section, which has more than 200 members, culminating in chairing the section in 2007-2008. He has also designed, moderated, and been a speaker for various seminars, and now serves on the programming committee of NABE. Mark was earlier recognized by his peers nationally with the NABE Peer Excellence Award.

Mathewson, a lawyer and a journalist, began work with the Illinois State Bar Association in 1988 after practicing law, writing for numerous publications, and teaching journalism. He now oversees all bar publications, including the Illinois Bar Journal, a variety of newsletters (both online and in print), and books. He is also the point person for helping Association members with online legal research.

Mathewson is a resident of Athens, Illinois, near Springfield. He and his wife Barb have two daughters, Molly and Margie. He is a musician (award-winning bluegrass song-writer and performer), radio personality (former host of “The Bluegrass Breakdown” on Springfield’s NPR station), and playwright (whose historically accurate musical “New Salem Harmony” ran at New Salem’s Theatre in the Park).

The National Association of Bar Executives, an independent not-for-profit organization, was founded in 1941 to serve the professional staff of state and local bar associations and law-related organizations.

Posted on October 24, 2011 by Chris Bonjean
Filed under:
ISBA News

Congratulations Mark. I've enjoyed working w/ you over the years.

Every member who works withISBA staff know that they are the best. This award recognizes the high standards that Mark and others set daily. Way to go, Mark.