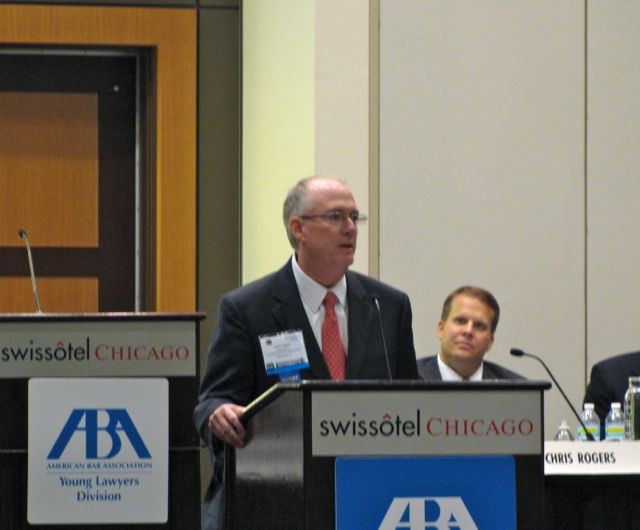 Illinois State Bar Association President John E. Thies debated the merits of an ethics proposal that would allow nonlawyers to be owners of and share fees of law firms before the American Bar Association's Young Lawyers Division Assembly on Friday afternoon in Chicago. The ISBA Board of Governors passed a resolution in support of retaining a previously-adopted ABA policy that disallows such arrangements.

Thies debated former ABA President Tommy Wells on the issue. ISBA members Christopher Niro and ABA YLD Chair Michael G. Bergmann also spoke on behalf of the measure. The YLD Assembly voted 89-65 in support of ISBA's resolution. The issue is scheduled for consideration by the ABA House of Delegates on Monday, Aug. 6.

The resolution reaffirms the ABA policy – adopted in 2000 – that law firms shall not be owned by non-lawyers and legal fees shall not be shared with non-lawyers. Proposals that would change this policy have been circulated in connection with the work of the ABA’s Commission on Ethics 20/20.

Letting non-lawyers own law firms and/or share fees with lawyers is another step towards making lawyers into a trade, rather than a profession. It is bad enough that work is being outsourced to India, making the work seem like a commodity, rather than a personal service, as it has been historically, and as most clients expect. We did not go to law school, study for the bar exam, and work the hours that we work so that we can answer to Warren Buffett. There are other ways to modernize. This is a horrible idea!