The newsletter of the ISBA’s Bench & Bar Section

Working together to increase awareness and reduce stigma of mental illness

For the first time in many years, the Mental Health Section Council held its monthly meeting outside the Chicago Regional Office. On April 15, the Section Council conducted its business in the Illinois Bar Center in Springfield.
Unfortunately, the actual meeting was somewhat sparsely attended, due in large part to the blizzard that hit the state on Sunday, April 14. For those who braved the hazardous weather, the agenda after the meeting was well worth the trip.

After the business meeting adjourned, Section Council members walked next door to the Illinois Supreme Court, for an amazing event planned by Justice Anne M. Burke. Although the court was not in session, Justice Burke not only agreed to host the gathering, she made it a priceless event! 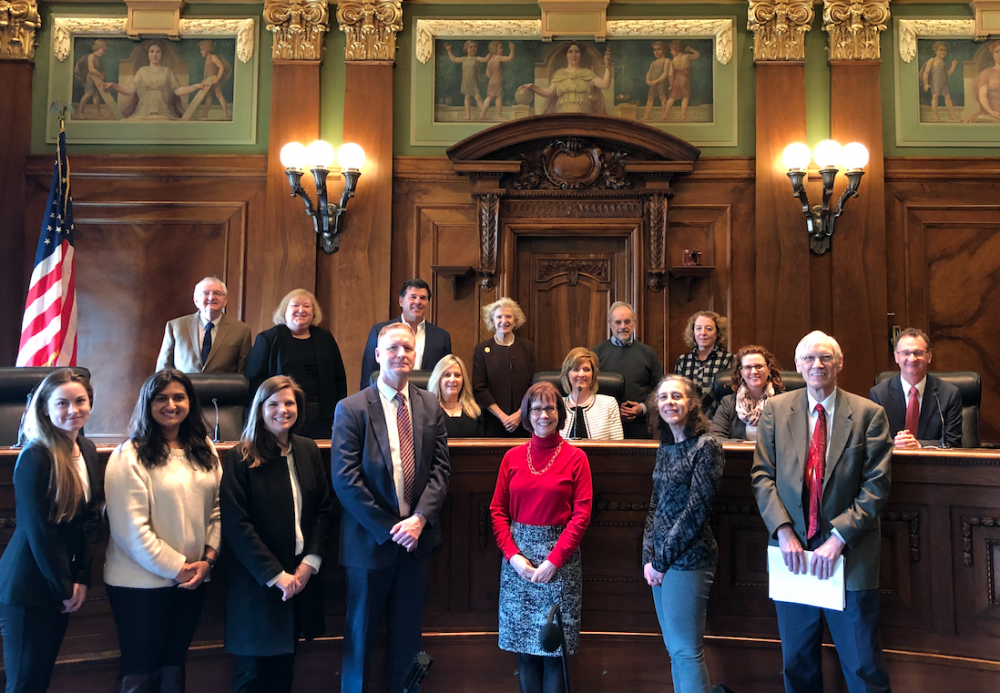 During lunch in the appellate courtroom, the group watched an edited version of the Insanity Retrial of Mary Todd Lincoln, focusing on the examination of expert witnesses Bennett L. Leventhal, MD and James L. Cavanaugh, MD.  Following the re-enactment, the group moved across the hall to the Supreme Court Courtroom, where Justice Burke and John Lupton concluded the tour in the Court’s deliberation chamber. They then led a discussion following the video in the courtroom.

Present day mental health issues became the next focus of the discussion, as Hon. Mary K. O’Brien, Appellate Justice in the 3rd District and President of the Lawyer’s Assistance Program Board of Directors; Hon. Lauren Ediden, Associate Judge in Cook County 2nd Municipal District Court, who oversees the Mental Health Court; and Cheryl Potts, Director, The Kennedy Forum Illinois, each talked about the programs they work with and the mental health implications.

Justice Burke concluded the program with a call to action, challenging the members of the ISBA Mental Health Section to work to increase awareness of mental health issues and treatment. Recognizing the many resources of the ISBA—newsletters such as this one, CLE programs, “Ask a Lawyer” videos for the public and “Quicktakes” videos for lawyers—as well as the many practice sections in which lawyers are affected personally or professionally by mental illness, the challenge seems a little less daunting. The Mental Health Section Council is looking at ways to meet the challenge and accomplish the goal of increased awareness and reduced stigma of mental health issues and treatment, and welcomes any ideas. Please consider this your personal invitation to join in that effort!

Sandy Blake is the current chair of the Mental Health Section Council and Vice-chair of Bench and Bar. Contact her at sandyb9960@comcast.net.

Back to the July 2019 Newsletter