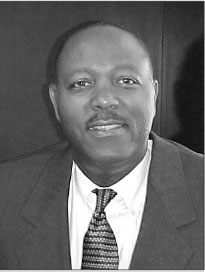 Donald Wilkerson assumed his duties as magistrate judge for the United States District Court for the Southern District of Illinois on January 4, bringing with him a wealth of experience from the classroom, the courtroom, and the local community.

A native of East St. Louis where the courthouse is located, Judge Wilkerson, 53, is the first African American to serve on the Southern District bench. In fact, he is the first minority of any sort among the district's judiciary; prior to his appointment, every judge in the district was a white male.

That fact did not escape the attention of Chief District Judge Patrick Murphy. Although he stressed that the district was not specifically looking for an African American or a female judge to fill the position, Judge Murphy recognized that it is "important for the bench to reflect the makeup of the entire community."

Judge Wilkerson agrees, though he goes further, saying that all public institutions should reflect the makeup of the entire community. "It gives the community at large more confidence in the institution," he said. "Without confidence, the institution cannot exist."

Judge Wilkerson was one of 33 applicants for the position, which was vacated by the retirement of Magistrate Judge Gerald Cohn. Peter Alexander, dean of Southern Illinois University School of Law, was chair of the "clean" search committee-clean in the sense that no judges participated in the screening and no members of the committee were from any of the applicants' law offices. The 11-person committee reviewed the résumés over a three-month period, interviewed nine of the applicants, and recommended five to the judges of the Southern District. Judge Wilkerson was the unanimous choice.

Judge Wilkerson describes East St. Louis as a great place to grow up in the 1950s and 1960s, a city of hard-working individuals. While East St. Louis influenced his childhood, his parents had greater influence. He laughs as he reminisces, "They made me toe the line."

In 1973, Judge Wilkerson returned to East St. Louis after graduating from Illinois State University with a political science degree. He quickly became a favorite teacher at Clark Junior High School. Melissa Brooks, who is now a second-year law student at Southern Illinois University, was in Judge Wilkerson's pre-algebra class and remembers that he was a teacher all the students wanted to have. She says Judge Wilkerson left behind a legacy in East St. Louis schools. Brooks and her classmates were all disappointed when he left to pursue his legal career.

While always interested in law, Judge Wilkerson realized his dream of attending law school only after St. Louis University started its night program. He enrolled in SLU's second night class and graduated in 1993.

With a background in math, Judge Wilkerson initially thought he would be a tax attorney. After taking a real estate class, he thought he would pursue a career in real estate. While clerking one summer, he discovered that he enjoyed litigation. It was only after he began working in a civil litigation firm, however, that he got his first taste of white collar crime. There he found his niche. When the U.S. Attorney's Office in St. Louis expressed an interest in having him join their team, he quickly accepted.

Judge Murphy praised Judge Wilkerson as being "streetwise" and able to relate to people from all walks of life in his courtroom. In fact, Judge Murphy looked beyond Judge Wilkerson's résumé in search of recommendations. Coincidentally, a courthouse security officer was the former principal of an East St. Louis school where Judge Wilkerson taught. His greatest compliment was that he could trust then-Coach Wilkerson with "his volleyball girls." When told of the story, Judge Wilkerson smiled and mentioned that some of those same athletes still contact him.

Judge Wilkerson has never focused on the hurdles facing him as a minority. "Everyone faces obstacles that they must overcome," he said. "Being a minority has just given me a different perspective." Keeping his qualities and skills in mind, he always believed his abilities would carry him far.

From his teaching and coaching experiences, Judge Wilkerson has dealt with "thousands of people [and] thousands of personalities." The invaluable understanding gained from teaching directly relates to his new career as a judge. "I have managed classrooms of 30, 35 people; I think I can manage a courtroom of five or 10," he said. "And I intend to manage my courtroom."

In an interview with the Belleville News-Democrat, Judge Wilkerson said that he wants "to bring competence, professionalism, and decorum to the bench." He plans to act as a role model by exhibiting those traits himself and insisting that those in his courtroom do so as well. "Everybody takes their lead from the judge," he explained.

JENNIFER CLAIRE SPRAGUE is a student in the Class of 2006 at Southern Illinois University School of Law in Carbondale. Law students are encouraged to submit articles to be considered for publication in this newsletter. Send them via e-mail to Susan Brazas, Editor, at smbrazas@barrettandgilbert.com.