The Chicago Bar Association/Alliance for Women: Call to Action for Women Attorneys

This Call to Action, the first in Chicago but similar to Calls to Action put out by other U.S. bar associations, addresses the problem of a disproportionately low percent of women attorneys in leadership ranks in Chicago's law firms. Even though females have been recruited into these law firms in roughly proportionate numbers to their graduation from the top law schools for many years-statistics kept by the National Association for Law Placement ("NALP") indicate that the percent of female associates has increased 40 percent since 1998-yet women attorneys are not seen in leadership positions as evidenced by the lack of female equity partners, practice group leaders, committee chairs and managing partners. The Alliance for Women believes that the leaders of Chicago's law firms must address and work to solve this issue.

In 2004, NALP statistics revealed that the average percent of women partners in Chicago law firms was 18.12, as evidenced at right by the top 20 firms ranked according to female representation in the partnership.

These statistics from the Chicago Lawyer's Diversity Survey of Chicago law firms (July 2004) reveal only 10 law firms are at or above the 18.12 average percent. In addition, since most of the firms have two-tiered partnerships, the numbers of equity partners are even lower than the numbers in the above chart. Jenner & Block and Sidley Austin Brown & Wood are the only single-tier partnerships in the top 20 firm listing. It is important to note that these statistics are self-reported to the Chicago Lawyer and reflect the percentages of female partners as a percent of total partners.

• to have women represented on every firm committee in the same proportion as the number of women partners by December 31, 2007;

• to increase the number of women practice group leaders by December 31, 2007;

• to review its flexible hours policy and its use in order to ensure that alternative schedules are an equitable and viable option by December 31, 2007; and

• to improve materially any disparity in the rates in which men and women are retained, promoted and laterally recruited at the firm by December 31, 2007.

This Call to Action was specifically designed to allow every law firm to succeed at addressing the problem of the lack of women in leadership positions. The Call to Action goals serve to raise awareness of these concerns and to outline an action plan over a three-year period. In addition, the Alliance for Women developed a companion guidance, Best Practices for Ensuring Compliance With Commitment, to assist law firms in meeting these goals.

The Call to Action will be sent to the Managing Partners of Chicago firms and to General Counsels of Chicago businesses. While the Call to Action is targeted at law firms, any Chicago area legal organization is welcome to participate. Becoming a signatory is a simple process: provide the name and contact information for the firm and the contact person at the firm who will be responsible for meeting the goals of the Call to Action. A yearly report will be issued to the Chicago legal and business communities to monitor the progress of all firms in meeting the stated goals. Signatory firms will receive special recognition for their commitment to the Call to Action. A final report will be issued in 2007. 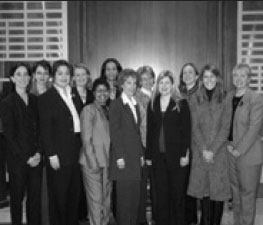 Ms. Grayson is a Partner at Jenner & Block LLP and is the Co-Chair of the Chicago Bar Association Alliance for Women.