A group of attorneys from Belarus recently visited Jenner & Block to learn more about the success of women attorneys and their professional development opportunities in the United States. The Belarus delegation visit, coordinated by David Austin, a Jenner & Block associate, was part of an ABA-sponsored program to assist international lawyers in improving legal systems in their own countries. Stephanie A. Scharf, President of the National Association of Women Lawyers and a partner at Jenner & Block, addressed the group, emphasizing the importance of networking to further women's interests in the profession. In addition, Elizabeth A. Fine, an associate at Jenner & Block, reiterated the importance of networking and emphasized the value of developing a network at an early stage. By encouraging law students to begin networking in bar associations, young professionals will have established a network on entering the field. Lastly, the delegation learned about Jenner & Block's Women's Forum, a firm-sponsored organization devoted to expanding opportunities for women within the firm as well as in the profession at large.

The delegation came to Chicago to obtain background and insight in order to improve the legal profession in Belarus. Since the fall of the Soviet Union, the legal system in Belarus has struggled under the autocratic leadership of President Alyaksandr Lukashenka. Under allegations of a rigged election, the people of Belarus passed Lukashenka's presidential referendum to make Belarus the only country in Europe to allow its leader to stay in power virtually for life. Several reports circulated suggesting that "there is no rule of law in Belarus," thereby allowing Lukashenka's personal decrees to override the authority of the law. In fact, Lukashenka has largely ignored the decisions of the Constitutional Court, the Belarusian equivalent of the Supreme Court, by declaring its decrees unconstitutional. Belarusian Parliament has attempted to combat Lukashenka's unilateral rule by drafting a new version of the constitution. However, Lukashenka has reorganized Parliament by appointing formerly elected members, thereby undermining any progress by the opposition.

Lukashenka has stifled the spread of legal knowledge by restricting nongovernmental organizations (NGOs) that would advance legal literacy. Lukashenka has the power to deny NGOs registration and liquidate any NGO after three warnings. Furthermore, tax authorities can extract money from bank accounts, based on a one-sided determination that the person or organization owes taxes. Under Lukashenka's governance, the tax authorities can legitimately disregard adverse court decisions. The President's actions make it difficult for citizens to access legal information and resources. The average citizen is unaware of her rights and unfamiliar with legal remedies.

To combat Lukashenka's dominance over the legal system, the American Bar Association Central European and Eurasian Law Initiative (CEELI) began a program in Belarus in 1992 to raise awareness of legal alternatives and empower the court system. CEELI initiated a similar program in Azerbaijan. The delegation visiting Chicago was part of an effort by CEELI to support legal reform in Belarus. In addition to sending foreign attorneys abroad, CEELI helps raise awareness of citizens' rights through legal literacy programs.

CEELI provides assistance to legal service centers as part of their Legal Advice Center program. CEELI trains lawyers in substantive law and advances lawyering skills through seminars. The organization hopes to encourage information sharing and support by creating networks among participants. CEELI also launched the Community Action Initiatives program in which attorneys act on behalf of entire communities to force local authorities to comply with the law. In order to monitor Lukashenka's violations of the law, CEELI created the Independent Society for Legal Research. After Lukashenka liquidated the NGO, the group renamed themselves the Foundation for Legal Technologies to sidestep Lukashenka's dismantling of the organization. In addition to documenting the President's abuses, the organization is a resource center for lawyers representing NGOs. Lastly, CEELI established an International Law Video course targeted for young lawyers. The course educates attorneys on foreign, especially Western, systems of law as models for Belarus. This program is part of CEELI's larger push to advance legal education. CEELI upholds Western models of networking so that a new generation of attorneys can hold Belarusian authorities responsible for their actions and educate the public of legal redresses in the face of state oppression. 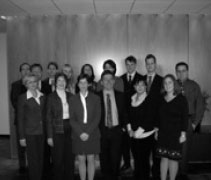