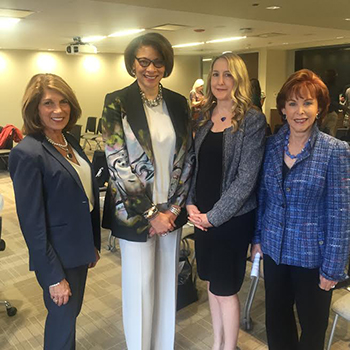 YWCA Metropolitan Chicago and DyMynd partnered during Money Smart Week 2016 to feature events that focused on four ways that we can impact wage equality and help women obtain financial empowerment: EARN, INVEST, SPEND and GIVE. On April 25, 2016, Women & the Law Committee member Kristen Prinz presented at “It’s the Money, Honey,” the seminar that focused on EARN: wage equality.

The Equal Pay Act of 1963 is a federal act that amended the Fair Labor Standards Act, aimed at abolishing wage disparity based on sex. It applies to companies with 50 or more employees and prohibits discrimination on pay based on gender.

The Paycheck Fairness Act is not law. It is legislation that was first introduced five years ago, and has been rejected by the United States Congress twice. The act would expand the scope of the Equal Pay Act of 1963 and the Fair Labor Standards Act. The act would require transparency in pay, but only if you ask the right question. For example, “I don’t think I am paid on par with [man with same qualifications], show me proof that I am.”

Kristen points out that employment discrimination cases are hard to prove so we have to be courageous in speaking up.

Fellow presenter Joanne Moffic-Silver, General Counsel at Chicago Board Options Exchange, noted that many companies need to add women to roles that are not considered “women’s jobs.” She pointed out that when jobs become too woman heavy, they are considered “women’s jobs” and that institutionalizes lower pay. You can speak up if your company has a hotline, a general counsel, or risk management function.

Did you know that when women are part of the decision making process, the financials are better? Research has confirmed this: women board directors and women in senior leadership are connected with better financial performance.1

Presenter Virginia “Ginny” Clarke, President & CEO at Talent Optimization Partners, LLC, does not want us to sit back and expect things to be OK soon. We have to be proactive and make this happen. You may have to change jobs if you are not getting what you deserve, but don’t just pout and leave – fight it first. Learn to play the game. Start by looking at your competencies and performance and write it down. Go in to your boss right after a big success or after a lot of money comes in. Don’t wait for your review and don’t whine – write up the highlights of your year and state your worth.

If you have already made it, reach back! Become a mentor. Advocate for better policies at your firm. Know your worth, stand up for yourself and get allies to back you up. Be brave. The time has come. It is long overdue. 

Back to the June 2016 Newsletter