By Timothy A. Slating

The ISBA surveyed members in private practice in Illinois about their practice setting, compensation, and benefits. Here are the top takeaways.

The results from the ISBA's 2014 Compensation and Benefits Survey are in. The survey, which was spearheaded by the ISBA's Standing Committee on Women and the Law and championed by Immediate Past President Paula Holderman, was sent to members who are actively engaged in private practice with a primary office in Illinois. Its goal was to better understand the economic realities and workplace environments affecting these members. Readex Research conducted the online survey from June 4-16, 2014 and analyzed its results for the ISBA.

In total, the survey generated useable responses from 1,310 members. The typical respondent is 47 years old, has been licensed for 18 years, and has been practicing at his or her current firm for eight years. 65 percent of the respondents are male and 35 percent are female.

This article details the results from five areas of the survey that are likely to be of general interest. Please bear in mind that these results are only representative of ISBA members who are engaged in private practice and who voluntarily responded to the survey. Also, most results are reported using a median value, which is the value lying at the middle of all response values (i.e., 50 percent of values are below it and 50 percent are above). Because median values are not influenced by extreme values, they tend to represent the "typical" response. For a fuller discussion of the survey results, ISBA members can access the report at www.isba.org/2014compensationsurvey. 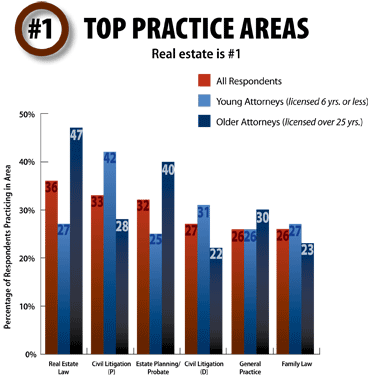 The chart presented here includes the six practice areas selected by the largest percentage of respondents. Interestingly, older attorneys are significantly more likely than other respondents to practice in the areas of real estate and estate planning/probate. Young attorneys, on the other hand, are more likely to do plaintiff's side litigation.

The practice areas selected by the lowest percentage of respondents are mineral law, antitrust/unfair competition law, public utilities law, and animal law. Each was only selected by one percent of respondents. 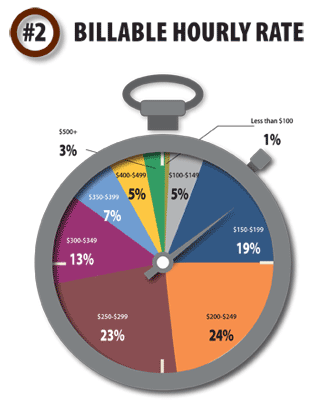 89 percent of the total respondents provided their billable hourly rate - 11 percent left the answer blank. The typical response was a billable hourly rate of $250, but as you can see in the chart, a wide range of rates were provided. Six percent of respondents providing an answer indicated a rate less than $150 and eight percent indicated a rate greater than $400.

The survey results also show that an attorney's billable hourly rate tends to correlate positively with the size of the firm that he or she practices in. The typical hourly rate for solo practitioners was $225, while that of respondents in firms with 50 or more attorneys was $273. Respondents practicing in firms of 2-10 attorneys had a typical rate of $250 per hour, those in 11-19 attorney firms had a slightly lower typical rate of $225, and the average billable hourly rate for those practicing in firms of 20-49 attorneys was $250.

Finally, it is worth noting that the survey results show the typical male respondent earning $15,500 more than the typical female respondent. Readex Research, which conducted the survey and analyzed its results for the ISBA, notes that "[t]his is likely due, at least in part, to the abundance of males in partner roles compared to females and the differing levels of experience between the genders, on average." Specifically, out of all the respondents who said they are some type of partner at a law firm, 74 percent were male and only 26 percent were female. Also, the average number of years licensed for all male respondents is 20.9, compared to 14 years for all female respondents. 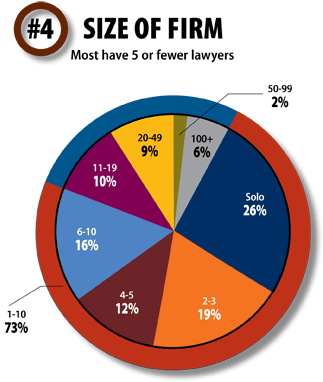 Most have 5 or fewer lawyers

As the chart here shows, 26 percent of all respondents are solo practitioners, 73 percent work at firms with 10 or fewer attorneys, and only 17 percent work at firms with 20 or more. While the typical (i.e., median) attorney who responded to the survey works at a firm with a total of 4 attorneys, the average (i.e., mean) office size across all respondents is 9.7 attorneys. This average of 9.7 attorneys is made up of an average of 5.2 partners (4.1 male and 1.1 female), 3.5 associates (2.1 male and 1.4 female), .5 of counsel, and .2 contract attorneys.

Out of all respondents who are not solo practitioners, 48 percent are partners at firms and 43 percent are associates. The remainder are of counsel (4 percent), contract attorneys (2 percent), and "other non-partner" (3 percent). 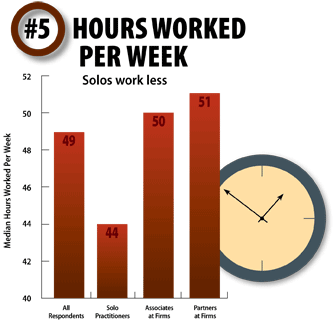 Despite the cliché that self-employed people work for a brutally demanding boss, solo practitioners as a group report putting in fewer total hours at the office than respondents as a whole.

Timothy A. Slating is the ISBA's Assistant Director of Publications and the Assistant Editor of the Illinois Bar Journal.