ISBA Governance: Is it Time for Change?

Are the ISBA's 27-member Board of Governors and 203-member Assembly too large for today's association environment? These and other questions are under review by a pair of special committees, and they want to hear from you.

The last 20 years have seen unprecedented change in the legal profession and the associations that inform, serve, and advocate for lawyers. The Illinois State Bar Association has not been immune from these changes and is working to address the challenges they pose for its members and Illinois attorneys as a whole.

One aspect of this effort is a review and examination of the ISBA governance structure. During her term, Immediate Past President Paula Holderman established the Board Governance Committee and the Assembly Governance Committee. Both committees are sharing their knowledge and opinions about ISBA governance in this article. They encourage your feedback by way of comments to the electronic version of this article (www.isba.org/ibj/2014/11), discussions on one of the many ISBA email discussion lists (www.isba.org/discussions), posts to the governance committees' webpage (www.isba.org/governance), or direct contact by phone or email to a committee member.

To help start the conversation, we offer the following frequently asked questions about the committees' work.

Q: Why is ISBA leadership looking at the ISBA governance structures? 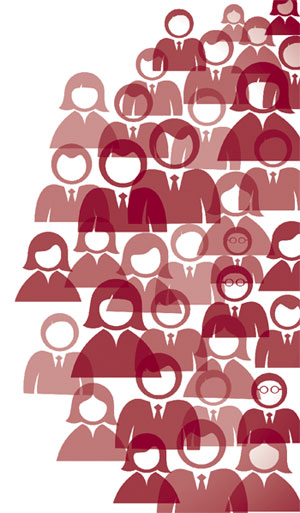 ISBA leaders have an ongoing fiduciary responsibility to review all ISBA functions, activities, services, and programs to make sure member funds are spent wisely and that members are receiving an appropriate return on their dues investment. Reviewing governance is clearly within the purview of this responsibility.

More specifically, the costs associated with the existing governance structure are significant and it is reasonable for the leadership to ask whether those resources are being spent well, especially in relation to other Association activities. Underscoring the above two factors, evidence indicates a declining interest in governance among ISBA members.

Q: What evidence shows a decrease in membership interest in governance?

A: Since 2001, electoral turnout in ISBA elections has trended downward from 28 percent in 2001 to 22 percent in 2010 (the last year of universal paper ballots), 16 percent in 2011 (the first year of electronic voting), and approximately 14 percent during the last three elections.

In six of the last 10 years, the Board of Governors has had to appoint delegates to serve in the Assembly because not enough candidates ran for the available seats (appointments ranged from two to 38). Also, actual participation by the elected members of the governing bodies, primarily the Assembly, has been poor. For the 203-seat Assembly, delegate attendance at the seven meetings since December 2010 has never exceeded 150 (at the 13 meetings between December 2004 and December 2010, the average attendance was 163). Based on a review of tabulated votes during some of the seven Assembly meetings since 2010, attendance has ranged from 102 to 139.

Finally, member surveys show that lawyers join and renew their ISBA membership for a variety of practice oriented reasons and products such as daily e-clips, publications, or CLE. These surveys reflect little, if any, interest in ISBA governance.

Q: Did the switch to electronic voting in 2011 lead to lower voter turnout? 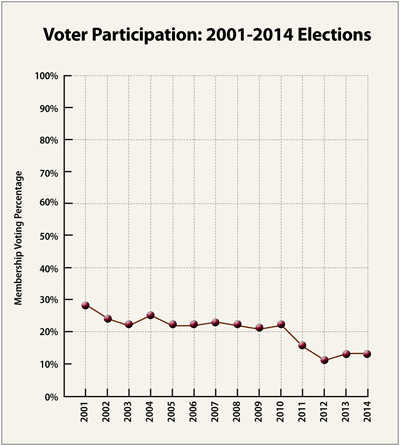 A: This doesn't appear to be the case. The declining trend in voter turnout began well before electronic voting became available. Also, numerous safeguards are in place to ensure that every member gets a ballot (even a paper one if the member prefers) and that electronic voting is easy. In fact, electronic voting is extremely popular for those who choose to vote (approximately 93 percent of votes cast in the last election were electronic - the percentage approaches 96 percent if you exclude "privileged" members, who are 75 and older).

More fundamentally, electronic voting doesn't explain the lack of candidates or poor meeting attendance. The committees believe that the most likely explanation for these trends is the simplest one - a lack of interest in ISBA governance.

A: There may be as many reasons for this lack of engagement as there are ISBA members. However, the committees believe that most of what the ISBA governing bodies do isn't important to most ISBA members' day-to-day practice. This reality, combined with the routine pressures of practice, makes it reasonable to conclude that participation in ISBA governance, whether in the form of voting or running for office, is not a priority for most members.

For the record, the committees do not regard this demonstrable lack of participation in governance by the broad membership as a necessarily bad thing or a poor reflection on the quality of ISBA governance. In fact, it may be a powerful vote of confidence that the ISBA governance structure is performing well.

Q: If ISBA governance performs well enough, why change it?

Q: Is cost a factor in reviewing ISBA governance?

A: Economic efficiency is one aspect of the governance review. The direct amount budgeted for officer, Board, and two Assembly meetings for FY 2014/2015 is approximately $270,000 (about 3.5 percent of the ISBA's total budget). Additionally, approximately $90,000 of staff time will be devoted to these meetings.

To put these numbers in context, the ISBA approved FY2014/2015 budget allocates $189,000 for all committee support and $331,000 for all section support. Any savings (in direct dollars or staff time) realized from changes in governance can be redistributed to other programs and activities with greater membership interest and benefit.

Q: Are other aspects of governance being reviewed?

A: The ISBA's three primary governing bodies, the Assembly, the Board of Governors, and the statewide elected officers (often acting as an executive committee) appropriately fulfill their duties under the bylaws. Issues are debated, positions are taken, ISBA policy is made.

Nonetheless, the size of the Board and the Assembly may impede debate and foster a dynamic where many members do not contribute. Chances are lawyers have seen this with large boards they serve on or advise.

Another concern is timeliness. Many issues, like reacting to legislation or rulemaking, require leadership input that cannot wait for Board or Assembly action. By the time the next scheduled Board or Assembly meeting is held, these issues have been resolved by the officers with the help of input from the relevant sections or committees.

Also, by the time the Assembly (and to a lesser extent the Board) reacts to these issues, they have been thoroughly vetted by the officers, the Board, or substantive subcommittees of the Board or Assembly. As such, decisions about them by the larger body may seem to be preordained.

Furthermore, much of the Board and Assembly meetings are made up of reports and other informational items.

The combination of these systemic issues may tend to diminish interest, even among Board or Assembly members, which in turn negatively affects the quality of the governance experience.

Q: Do the committees have any formal recommendations for change?

A: Because the committees would like to hear from the membership, they do not yet have any formal recommendations. But the committees' discussions have been frank and wide-ranging. Possible changes discussed include eliminating the third vice president position, reducing the size of the Board by as many as 10 or as few as four members, eliminating the Assembly or substantially reducing its size, and changing the Assembly composition to include section representatives.

Q: If implemented, would these changes materially affect the administration or policy direction of the Association?

A: The committees do not believe so. The initial question is whether a smaller Assembly or Board of "X" size can make decisions as good as those made by the 203-member Assembly or the 27-member Board of Governors.

Q: If these governing bodies are eliminated or reduced in size, how does the ISBA ensure ample leadership opportunities, particularly for younger members or those whose participation makes ISBA more diverse?

A: Statewide opportunity through elected governance positions will still exist for those who feel passionately about the ISBA. As is the case now, some of those positions can be specifically designated for certain membership categories and appointed leadership positions can be preserved to assure the ISBA's commitment to diversity. And leadership opportunities will continue to exist at the section and committee level, where much of the important work of the ISBA is done.

Q: How are other bars governed?

Six voluntary state bars have boards larger than the ISBA's. Of the remaining 12, the average board size is 22. The average board size for metropolitan bars is 18. Interestingly, for its first 95 years the ISBA was governed solely by a Board of Governors. It wasn't until 1972 that the Assembly was established to generate more interest and participation in the ISBA. The first Assembly had 121 members - 48 delegates from Cook, 48 delegates from downstate, and 25 Board of Governors seats.

Q: Are other associations reviewing their governance structures?

A: Change is affecting all associations, not just bar associations. Many are doing the same type of review the ISBA is undertaking now.

A: Again, let us know what you think about ISBA governance. Post a comment to the electronic version of this article or on the governance committees' webpage. Talk to one of us. The views of the membership are important as the committees move forward with any formal recommendations. Also, if you have any questions about the work of the committees, please let us know.

The question before the ISBA is straightforward: what governance structure will best serve the membership for the future? Is it the one we have now? Something different? Clearly, change is upon us, and the ISBA should adapt to that change. Our review of how the bar governs itself is just one part of ISBA's larger effort to meet the challenges of the future.

Vincent F. Cornelius of Cornelius Law Office in Wheaton is ISBA Second Vice President, and Hon. Celia G. Gamrath is a member of the ISBA Board of Governors and a Cook County Circuit Court judge. They are co-chairs of the ISBA Board Committee on Governance. Timothy J. Chorvat of Chicago, ISBA Assembly member and chair of the Assembly Committee on Governance, is a partner at Jenner & Block.

With all due respect to Judge Gamrath and Messrs. Cornelius and Chorvat, this article leaves so many questions unanswered. According to its own Web site, the ISBA presently serves 30,000 members . How does that figure compare to the membership of the other voluntary bar associations used as comparators? How does it compare to our own membership in 1972? Moreover, if the Assembly dates back to 1972, why does this article only present data from 2001 to present? Does the perceived downturn in members' interest in governance represent a true departure from the past, or does it follow the broader economy's boom-and-bust cycle?

What was the original intent in creating an Assembly four decades ago? Is the mission of the Assembly merely to drum up interest and participation among the ISBA membership? At present each Assembly member speaks for over 145 ISBA members. Will the voices of all our membership constituencies -- women, minorities, downstate attorneys, solo practitioners, young lawyers, etc. -- continue to be heard in a smaller governing body?

I pray that the committees will present answers to these questions before making their recommendations.