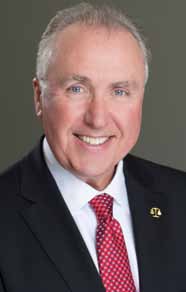 Tuesday, September 29, 2015 might have just been another busy autumn day for me. Certainly it was not unusual for me as ISBA president to have a late afternoon meeting (this time in person) with ISBA Executive Director Bob Craghead.

We meet often to go over issues, and this day we were to work on plans for the December Midyear Joint Meeting with the Illinois Judges Association at the Sheraton Chicago Hotel. What made this meeting special is that I learned about two hours beforehand that this was the exact day, 40 years ago, that Bob Craghead started his career with the Illinois State Bar Association.

After stopping to purchase a card to commemorate the day, I thought about how typical this was of Bob. He had not mentioned his 40th ISBA anniversary in any of our almost daily conversations, and I am grateful that a staff person in Springfield informed me before our meeting that day.

Predictably, when Bob opened his greeting card he began to share some fascinating history of his years with the ISBA. For those who do not know Bob Craghead, he prefers to remain in the background, the wizard behind the curtain. Along with his fellow Springfield and Chicago staff members, he keeps the Illinois State Bar Association operating at the highest professional level. He is the one primarily responsible for the ISBA's richly deserved reputation as one of the best bar associations in the country.

Bob is also a walking encyclopedia of ISBA history. He has an unflappable demeanor (a requirement for his position), a great sense of humor (also a requirement), and a sharp mind for trivia on all topics. I have no doubt he'd win big money on Jeopardy! He was also elected by his peers to become president of the National Association of Bar Executives in 2017.

On the way home from our meeting I decided we needed to share Bob's story with our members. Our organization would not be what it is today without his 40 years of dedication, loyalty, and commitment. Since I knew Bob would probably not agree, I exercised my presidential prerogative to see that he appeared on the IBJ cover, as so many ISBA presidents have done in their presidential years.

My respect and gratitude for Bob Craghead have only grown as I reach the midpoint of my presidential year. I think all past ISBA presidents would agree that he is one of the most professional, thorough, effective, organized, efficient, and pleasant executive directors any professional organization could ask for. A few others who know Bob have graciously shared their thoughts about him.

Illinois Supreme Court Chief Justice Rita Garman. "On behalf of myself and my colleagues on the Illinois Supreme Court I am pleased to recognize Bob Craghead for his 40 years of dedicated service to the ISBA. Bob is a consummate professional, who guides the ISBA with humility and quiet competence. The ISBA could not have been in the hands of a better steward for the past four decades."

Jayne R. Reardon, Executive Director, Commission on Professionalism of the Illinois Supreme Court: "Bob is a wise man who cares deeply about excellence and the legal profession, but never takes himself too seriously. When I became executive director of the Commission on Professionalism in 2009, I called on him for help. He introduced me to people around the state and always made himself available if I needed a word of encouragement or advice. Bob has been my lodestar and mentor ever since. Because there are not many executive directors of professionalism commissions in the country, I treasure the chance to test my ideas and discuss initiatives and actions with him. He is a gem!"

Terrence Murphy, Executive Director, Chicago Bar Association: "Bob Craghead is widely recognized and highly regarded by his peers in the National Association of Bar Executives for his outstanding leadership and management skills. Bob is a consummate professional and a pleasure to work with. Congratulations to my good friend on his 40th anniversary. The ISBA, CBA, and all of the bar associations serving the legal profession and the public in Illinois are better because of his distinguished career."

Supreme Court Justice Thomas Kilbride: "Bob is a masterful manager. He is pleasant, prompt, and thorough. He gets it done with apparent ease, even though his tasks at hand are many and often complicated."

I hope you enjoy getting to know Bob better, and maybe learn something new about the ISBA, by reading the interview beginning on page 22. Happy anniversary, Mr. Craghead!

Happy Holidays to our ISBA friends and colleagues

Holiday greetings from your ISBA elected leadership - we are privileged to serve you and wish you a warm, joyous holiday season and a happy and healthy 2016.