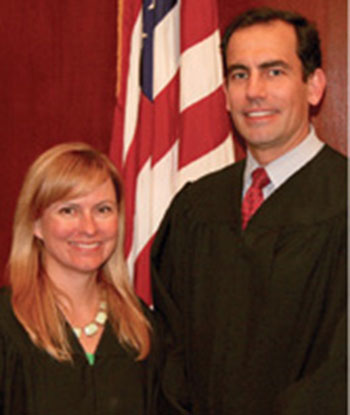 IBJ: Are you surprised that your kids have two judges as parents? Or did you see this coming early in your careers?

Mike: While being a judge someday was always a dream for both of us, we took very different paths. I was a private practitioner while Sara was an assistant state's attorney. Later I became a public defender and she worked as an assistant U.S. attorney.

The idea of dad becoming a judge was very real to the kids early on in my election campaign [in 2010] since they were involved in everything from parades to yard signs to the election night party. For Sara, it was more of an abstract idea until they attended her Senate confirmation hearing [in 2011] in Washington, D.C. We consider ourselves very fortunate to sit on the bench and to serve our community.

Mike: From a parental perspective, being a self-employed attorney gave our family an enviable level of flexibility for the many moving parts of raising six young children. Fortunately, now that our children are older we don't need that same level of flexibility with our fixed schedules. Our children have taken the whole thing in stride, and we can report to parents who aspire to be judges that it will have zero impact on the orders you give at home.

Sara: We also have more in common to talk about as judges. Even though we sit in different courts, we are uniquely situated to truly understand the difficulties we each face at work.

While our jobs allow us exposure to a variety of interesting legal issues, the stakes are high and it can be emotionally draining. I appreciate being able to come home to someone who relates to my day and offers perspective and good humor. It's also nice that we can bounce ideas off of one another and quickly understand the other's position. That being said, if we spent all of our time discussing work we would be the dullest husband-wife judges!

IBJ. Lots of lawyers are married to each other, but very few judges. Why do you think that is? Is it just a numbers game - just fewer judges, period - or is there something more going on?

Sara. First and foremost it's a numbers game. Becoming a judge is a bit like being struck by lightning. You have to have put in the hard work and effort, but still there's the element of being in the right place at the right time.

I'd also imagine you see fewer married couples on the bench because it is difficult to balance busy careers with raising a family. We were lucky to have close friends and family and very understanding colleagues along the way. There were also a lot of late hours working from home or even taking a sick child to work a day or two.

IBJ. Mike, you have a legendary name in the Illinois legal community. What's the story behind that?

Mike: Clarence Darrow is a tough name for the playground but a great name for an attorney! I was named after my grandfather who was a family physician in Dubuque, Iowa. Clarence S. Darrow was a distant cousin of my great grandfather.