When it came to "candor toward the tribunal," Honest Abe arguably failed to live up to his moniker if a legendary Lincoln story is true. 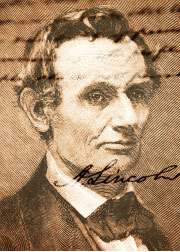 As we observed in the August issue (Are You a Lincoln Lawyer? beginning at page 44), Lincoln in his "Notes for a Law Lecture"1 described the qualities essential to being a good lawyer. Here we look at his advice about fees and about that most Lincolnesque of characteristics, honesty, viewing them in the context of our modern Rules of Professional Conduct and cases from Lincoln's practice and more recently.

Fees are important, far beyond the bread-and-butter aspect

Lincoln, out on the circuit with a wife and children back home in Springfield, had to make a living. His advice about fees was practical but also tied to his ethical viewpoint.

"An exorbitant fee should never be charged. As a general rule never take your whole fee in advance"2 he said. He nonetheless believed in being paid for good work and his practice reflected that.

A case in point is Illinois Central Railroad v. McLean County, Illinois and Parke, perhaps the most important lawsuit he ever handled. To subsidize the railroad's construction, the state gave Illinois Central a section of land on alternating sides of the right-of-way through the length of the state. The sale proceeds would fund the construction. To sweeten the deal, the legislation exempted the land from county taxation, infuriating the counties in the process.

Thomson Weber, Circuit Clerk of Champaign County, approached Lincoln about representing the county to attack the constitutionality of this "special legislation." Lincoln wrote him on September 12, 1853, advising that the railroad had approached him and unless the county could pay as much as the railroad, he would decline the offer. The county could not, so Lincoln successfully defended the exemption in the Illinois Supreme Court on behalf of the railroad.

Lincoln charged $5,000 - approximately $120,000 in today's money - by far the largest fee of his career. He later justified it by stating that he saved the railroad "half a million dollars," nearly $12 million today. (Interestingly, Lincoln had to sue the railroad for the fee in the McLean County Circuit Court.) The case arguably saved the railroads from being taxed out of existence, which would have delayed the state's economic development for years.

Illinois Rule of Professional Conduct 1.5 instructs lawyers not to charge "an unreasonable fee." Fee disputes are common between attorney and client. As the years have passed, the rules have suggested that a written attorney-client agreement or engagement letter is a good practice and sometimes required (e.g., in contingent fee and family law cases).

Being an honest lawyer

Lincoln wrote at length about lawyer honesty. He noted that "there is a vague popular belief that lawyers are necessarily dishonest.... [V]ague, because...confidence and honor are reposed upon lawyers by the people, it appears improbable that their impression of dishonesty is very distinct and vivid. Yet the impression is common, almost universal. Let no young man choosing the law for a calling for a moment yield to the popular belief - resolve to be honest at all events; and if in your own judgment you cannot be an honest lawyer, resolve to be honest without being a lawyer."3

Lincoln had a reputation for honesty even in his day. One contemporary called him "the most honest man I ever met." But consider the Woodford County case People v. Goings. The facts are based on an oral account, the credibility of which is sometimes questioned.

Lincoln's client was Melissa Goings, a 70-year-old woman whose husband had a history of abusing her. During his last attempt to do so, she grabbed a piece of firewood to protect herself. The blow she struck to his head caused his death. She was charged with murder, and Lincoln defended her.

The case was tried in the fall of 1857 and was not going well. The judge, James Harriot, was pointing the all-male jury toward conviction. Lincoln asked for a recess and took Melissa downstairs from the second-floor court room. She asked him for a drink of water. He opened the window and told her there was good water in Tennessee and returned to the courtroom.

She apparently climbed out the window and was never heard from again. Court records show that the following year when Lincoln was in Metamora for a Douglas campaign appearance he prevailed on the state's attorney to dismiss the case and discharge the bond.

These facts raise serious issues about Lincoln's conduct. Was Lincoln honest in handling the Goings case?

The Illinois Rules of Professional Conduct address lawyer honesty. Rule 3.3 requires "candor toward the tribunal" and prohibits "false statements of fact or law," imposes the duty to "correct a false statement," and forbids "offer[ing] evidence that the lawyer knows to be false." Rule 4.1 commands "truthfulness in statements to others," enjoining attorneys to not "make a false statement of material fact or law to a third person" or "fail to disclose a material fact."

In People v. Simac, 161 Ill. 2d 297 (1994), a criminal defense attorney was found in direct criminal contempt for having an office clerk sit at counsel table and be misidentified by an officer in a "driving under revocation" case. The trial court had noted the in-court identification of the defendant; however, the defendant was in the courtroom in the back row. The defense attorney made no statement to the court about the presence of the defendant or the identity of his office employee even at the time of the officer's in court identification.

The employee resembled the defendant and was identified by the arresting officer in the state's case in chief and in rebuttal. During the defense case, the employee testified that he was not the defendant. The defendant's case was dismissed on a motion for directed verdict, but defense counsel was found in direct contempt and fined.

The Illinois Supreme Court affirmed the contempt finding and the fine. The attorney contended that he did not act willfully, that no prior case suggested his conduct was improper, and that he had a responsibility to be a zealous advocate. His claims were rejected in a 4 -3 decision:

As this court has stated, 'An attorney's zeal to serve his client should never be carried to the extent of seeking to secure from a court an order or judgment without a full and frank disclosure of all matters and facts which the court ought to know.'
…The true identity of the defendant is clearly a fact 'which the court ought to know' because it is the responsibility of the court to ensure the defendant's right to be present at all stages of the proceedings against him. Therefore, an attorney must not deceive the court as to the defendant's identity despite the attorney's obligation to vigorously represent his client. Such a deception prevents the court from fulfilling its obligation and derogates from the court's dignity and authority.4

Lincoln faced a moral dilemma. His client was an abused wife and the all-male jury and judge in the aggressively paternalistic society of the time would not have responded to a battered-spouse defense.

It can be argued that Lincoln acted - or failed to act - in the furtherance of justice. But if the Goings story is true, it represents a lapse for "Honest Abe."

Guy Fraker is a retired attorney from Bloomington. He is the author of Lincoln's Ladder to the Presidency: The Eighth Judicial Circuit and other Lincoln articles and books.

J. Steven Beckett is an of-counsel attorney with Beckett & Webber PC in Urbana and the retired director of trial advocacy at the University of Illinois College of Law.