ISBA election season opens this month, with more than the usual number of contested races.

Spring is almost here, and that means it's election season at the ISBA. Voters will have an extraordinary number of choices this year, with contested races for third vice-president, four of six board of governors seats, and the assembly.

This issue of the Illinois Bar Journal has background about the candidates to help you make an informed decision. You'll find the same information on the web at www.isba.org/elections. 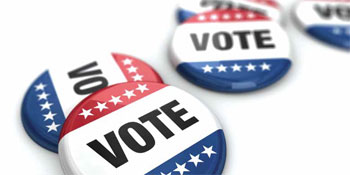 Ballots will be distributed soon. Paper ballots will be mailed and e-ballots will be emailed on March 26. Voting concludes April 30 at 4:30 p.m. CDT. All members with dues paid up by March 2 of this year are eligible to vote for races in their area.

Third VP. Candidates for third vice-president are chosen from Cook County and downstate (outside Cook) in alternating years. This is a downstate year, and the contestants are Jim McCluskey of Lisle and Lisa Nyuli of South Elgin. Learn more about them by reading their bios on page 9. This year's third VP winner will serve as the ISBA's president in 2018-19.

Board and assembly. Six members of the ISBA Board of Governors will be chosen this year from a large field. Two incumbents, Sonni Choi Williams of Peoria in Area 4 (Circuits 10, 14, and 15) and Charles Davis of Springfield in Area 6 (Circuits 7, 8, and 9), are running unopposed. The other four board races are contested.

In Cook County, Chicagoans John Damisch and Jessica O'Brien face one another. In Area 1 (Circuit 18), there's a four-way race for one seat among Kent Gaertner (Wheaton), Sharon Mulyk (Glen Ellyn), Keith (Chuck) Roberts, Jr. (Wheaton), and Michael Scalzo (Wheaton). In Area 3 (Circuits 12, 13, 16, 21, and 23), Jean Kenol of Joliet faces Rory Weiler of St. Charles. And in Area 8 (Circuits 3 and 20) Dennis Orsey (Granite City), Tom Speedie (Nashville), and Kristi Vetri (Belleville) are running for one open seat. Find out more about board candidates on pages 10-13.

The only assembly race this year is in Cook County, and it's contested as well. Twenty-five candidates are running for 23 seats. The candidate list appears on page 12.

All candidates - for third VP, board, and assembly - take office in June.

Don't stand on the sideline. A recent Journal article describes a disturbing trend. "Since 2001, electoral turnout in ISBA elections has trended downward from 28 percent in 2001 to 22 percent in 2010 (the last year of universal paper ballots), 16 percent in 2011 (the first year of electronic voting), and approximately 14 percent during the last three elections." Vincent Cornelius, Celia Gamrath, and Tim Chorvat, ISBA Governance: Is it Time for a Change? (Illinois Bar Journal, November 2014).

Think about it. Fourteen percent of members are selecting the leaders who chart the course and make policy decisions for one of the largest and most influential voluntary state bar associations.

You can help change that by casting your vote in this year's election, where there are so many candidates to choose from and your vote will truly make a difference. It's easy and only takes a few minutes. Be on the lookout for your ballot, and do your part to shape the ISBA's future.