The sweeping legislation also expands police officer training beyond the academy, bans chokeholds, and clarifies that citizens may film police officers, among other changes. 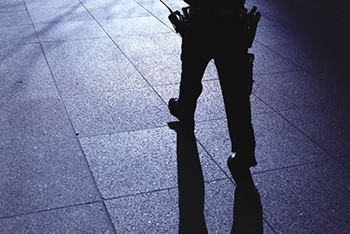 What some have called the nation's most comprehensive police body camera law will take effect at the turn of the year.

The bill, Public Act 99-0352, also takes several steps to improve police-citizen relationships by providing a uniform model for the use of police body cameras, expanding police officer training beyond the academy, banning chokeholds, clarifying that citizens may film police officers, and creating a database of officers who have been dismissed for misconduct or while under investigation. Most of the bill's provisions are effective January 1.

'Everybody behaves better when the camera is present'

The process of drafting and negotiating the bill is one of the most compelling things about it, according to Sean Smoot, director and chief counsel for the Police Benevolent & Protective Association of Illinois and the Police Benevolent Labor Committee. The bipartisan, bicameral legislation was part of a "consensus process" involving diverse parties such as the ACLU, the NAACP, law enforcement groups, community groups, and the bill's primary sponsors, Representative Elgie Sims and Senator Kwame Raoul.

Smoot agrees that in-service training for officers is important. As a member of the President's Task Force on Policing in the 21st Century, he reviewed evidence provided by hundreds of witnesses and thousands of pages of written testimony. "We spend very little money training police officers compared to other professions," he says.

As a result, the law puts in place annual and longer-term training requirements to "make sure that officers are adequately prepared to do their important job." Khadine Bennett, a staff attorney and legislative counsel for the ACLU, applauds the requirement, noting that "many people don't realize that law enforcement officers don't get training after the academy."

For Bennett, one of the most compelling aspects of the new law is the collection of data related to Terry stops (i.e., stop and frisk interactions between police and citizens). The data will allow lawmakers, civil rights groups, and others to learn what groups are stopped and frisked the most.

One of the most important elements is that officers are required to give an individual subjected to a Terry stop a receipt, she says. The receipts give individuals an "opportunity to prove that a stop and frisk happened." Senator Raoul feels that the receipts and data collection are important to help determine if stop and frisk encounters are being applied unevenly. Bennett says that the data collection provision will also help improve transparency and interactions between law enforcement and the community.

Bennett is also hopeful that the expanded use of body cameras may improve the behavior of both law enforcement officers and citizens. Smoot agrees with Bennett. "What the data tells us so far is that everybody behaves better when a camera is present. The camera's presence has a de-escalation effect." He cites to research from Mesa, Ariz., and London which demonstrates that the use of body cameras reduces officer use of force 30-70 percent, officer complaints by 70-90 percent, and injuries by 50 percent.

Bennett says that while body cameras "are not a magic bullet," they are a "good step." She stresses that the increased use of cameras should not come at the expense of privacy. The law provides for times where officers are not required to or may not use cameras. "It's about striking the right balance between capturing interactions with civilians while not overly surveilling the community, which was why we didn't require recording when officers were walking their beat or providing community care-taking functions."

The law's Freedom of Information Act (FOIA) provisions help to further balance this privacy interest. Under them, only certain types of recordings are available for disclosure pursuant to a FOIA request. Those recordings, defined as "flagged," are ones in which an officer discharges a firearm or someone is seriously hurt or killed, among other situations.

Reducing the number of recordings that can be disclosed helps reduce burdens on law enforcement, state's attorneys, and county clerks, says Smoot. He also notes that "citizen-police encounters can often happen at a low point in a person's life; once something gets on YouTube it's there forever."

Bennett agrees, noting that even when a recording is flagged, it may not be disclosable if a person on the recording has a reasonable expectation of privacy. She echoes Smoot, saying that "we don't want people to be able to submit FOIA requests for video of friends who got drunk and were arrested at Wrigley Field." Both Bennett and Smoot believe that the law does a good job of balancing access to information and individual privacy.

The new law also clarifies the right of citizens to record the police. After Illinois revised its eavesdropping law, social media sites were replete with posts claiming that it was illegal to record the police. The new law makes it clear that "recording police is okay and that law enforcement officers cannot stop people from recording," says Senator Raoul.

This right is not unlimited, notes Smoot. "The last thing we need is a large number of people charging into a crime scene or an arrest." As a result, the statute allows officers to take reasonable actions to control a crime scene.

By making it clear that citizens have the right to film police officers doing their job, the law "puts power in the hands of people who feel powerless," says Bennett. She believes that recording police officers does not have a chilling effect on police doing their jobs. "People recording from a safe distance will not impact their ability to do their jobs; law enforcement officers are trained to be in public."