Arrest but no prosecution in Fourth of July flag burning

The Champaign County State's Attorney explains her decision not to charge an Urbana man arrested for violating Illinois' unconstitutional but still on the books flag-desecration law. 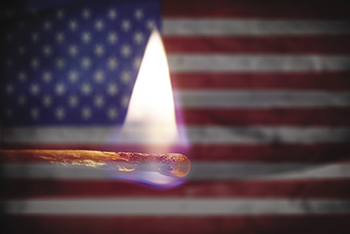 On July 4, 2016, the Urbana police arrested Bryton Mellott for burning the American flag. The day before, Mellott had posted a picture of himself burning the flag on Facebook, adding the hashtag #ArrestMe.

The post received attention across social media, including some threats directed at Mellott. In a statement to the News-Gazette, the Urbana police said that, because some of the threatening comments mentioned Mellott's employer, Mellott was taken into custody for his own protection and that of others (see http://www.news-gazette.com/news/local/2016-07-05/update-urbana-flag-burner-wont-be-charged.html).

The decision was made to arrest him under Illinois's flag desecration statute (720 ILCS 5/49-1). The statute prohibits publicly mutilating, defacing, or defiling the American flag or the Illinois State flag.

The statute is also unconstitutional. Flag burning is protected speech under the First Amendment. In Texas v. Johnson, 491 U.S. 397 (1989), the Supreme Court held that Texas' similar flag desecration law was an unconstitutional prior restraint on speech, albeit potentially unpopular speech. Although states have an interest in preventing breaches of the peace, the Court reasoned that Texas' existing statute prohibiting breaches of the peace was sufficient to protect that interest without also implicating First Amendment rights. It further found that Texas' interest in preserving the flag as a symbol of nationhood and national unity was a type of expression or symbolism, just like burning the flag.

After considering the state's interest in preserving the flag and subjecting that interest to the strict scrutiny test, the Court held that the Texas statute was an unconstitutional restriction on the content of speech. It noted that this protection extends to speech that society may find "offensive or disagreeable." Johnson, 491 U.S. at 414.

Illinois' statute was one of the 48 that were invalidated by the Court's ruling in Johnson. Julia Rietz, the Champaign County State's Attorney, declined to bring charges against Mellott, citing Johnson. Rietz's office was notified about the arrest as a local Fourth of July parade was underway. She notes that in her 23 years as a prosecutor, this is the first time the issue has come up in Champaign County. It's a "unique situation," she says. "We could have charged him under the state law, but what would be the result there?" Rietz points out that her job is to follow the law; a Supreme Court ruling trumps a state statute.

These types of statutes put prosecutors in an awkward position because they remain on the books and are technically "good" law. Why don't lawmakers repeal these invalid laws? Reitz says that there is a "conflict between our view of the law as lawyers and a politician's view of law as a message to send to constituents." The state's attorney's office could have prosecuted Mellott. The all but inevitable result would have been Mellott's defense counsel attacking the constitutionality of the law, leading to further litigation in the higher courts. "Why should [Mellott] be a conduit to correct a situation that the legislature created?" she asks.

The Urbana Police Department issued a statement after learning of Rietz's choice not to prosecute. "The Urbana Police Department recognizes that this is a case where the right of free speech may have been in conflict with the safety of innocent and uninvolved citizens. Our officers strive every day to achieve a balance between public safety and preservation of Constitutional rights." The statement noted that the police were relying in good faith on an existing law.

The state's attorney's job is to be "a gatekeeper between the public's demands and the law," says Rietz. She received mixed responses from the public with regard to her decision.

She likens reaction to the choice not to prosecute Mellott with the reaction to the state's new cannabis DUI laws. Under the prior DUI statute, a driver who tested positive for cannabis would be charged with a DUI, even if not intoxicated at the time they were driving. Rietz's office has prosecuted people under the old law in the past. When the governor's signing of the bill was reported in the news, Rietz says the reactions online were mixed, some directed to her.

"Some comments asked, 'What are you going to do about the people convicted under the old law?' I can't undo old prosecutions, but I can enforce the new law in the future. It's the classic 'damned if I do, damned if I don't' situation." This is an essential and necessary function of the state's attorney's job, Rietz noted, and she doesn't bemoan her position. "One of the great things about my job is that I represent all of the people of Illinois, including Mellott."

Forty years ago, I defended the Illinois Flag Desecration statute in the Illinois Appellate Court (People v. Sutherland, 29 Ill.App. 3d 199 (3d Dist. 1975). The Appellate Court, in a unanimous decision, written by Justice Stouder, who was no conservative, upheld the constitutionality of the law. Times were different then; the Vietnam war had just ended and over fifty thousand members of the armed forces had lost their lives. Many more American soldiers had suffered severe injuries. At the time, I strongly felt that the statute was constitutional. Today, in hindsight, I realize that I was wrong (as was the Court). Nevertheless, while I have changed my way of thinking, I fully understand the strong opinions on both sides. Conceptually, it is easy to say that flag burning is the very essence of exercising one's First Amendment rights, yet the reality of seeing an American flag burning always seems to be wrong. Ms. Rietz made the correct call, but that doesn't mean that the Urbana police were wrong in attempting to enforce a law that was still "on the books." Now is the time for the legislature to remove the statute, even though, at least in Illinois, it was held to be constitutional.