From the Newsletters - Drone On

If a drone flies over your backyard, is it trespassing? Invading your privacy? Do you have the right to shoot it down? 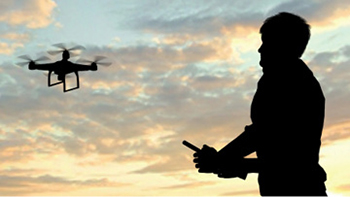 It's Sunday afternoon and the neighbor kid's drone comes buzzing over your yard, maybe 50 feet overhead. Like any good lawyer you ask yourself, "Is this drone flight violating my airspace?" (If you're a really good lawyer, you refer to "airspace" as "vertical curtilage.")

The short answer is yes, writes Elizabeth Austermuehle in the April Real Property newsletter. "[I]n the absence of federal or state regulations granting drones the right to fly over private property without the property owner's permission, drones do not have the right to do so," she writes. Though Illinois has passed legislation ordering up a task-force report on drone regulation (due July 2017), state law does not currently regulate drone use.

As for federal law, the FAA has long permitted flights over private property in "navigable airspace," which generally applies to the space 500 feet and higher above ground, Austermuehle writes. But it hasn't had much to say about drones - at least not until June 2016, when the agency "released its first operational rules for routine use of small [unmanned aircraft systems]," she writes. "The rules offer safety regulations for UAS weighing less than 55 pounds conducting non-hobbyist operations. Among other things, the rules require drone operators to keep the drones within their visual line of sight and prohibit flights over unprotected people on the ground who are not directly participating in the UAS operation."

But a good lawyer knows that having rights and asserting them are two different things. "Property owners may enforce their rights through tort law, and may bring trespass and invasion of privacy claims to do so," Austermuehle writes. "In Illinois, trespass is 'an invasion of the exclusive possession and physical condition of land.' Colwell Sys., Inc. v. Henson, 117 Ill. App. 3d 113, 116, 452 N.E.2d 889, 892 (4th Dist. 1983). Thus, if a drone operator flew a drone over your property below the FAA's navigable airspace, the operator would technically be trespassing on your land."

You might also be able to sue for invasion of privacy based on the "intrusion upon seclusion" branch of that tort, she writes. "[I]n Illinois, a plaintiff is required to show that (1) the defendant committed an unauthorized intrusion or prying into the plaintiff's seclusion; (2) the intrusion would be highly offensive or objectionable to a reasonable person; (3) the matter intruded on was private; and (4) the intrusion caused the plaintiff anguish and suffering. See Busse v. Motorola Inc., 351 Ill. App. 3d 67, 71 (1st Dist. 2004)." Certainly, "if a drone was equipped with a camera or other recording device that objectionably recorded the private activities of the property owner," the operator would be invading your privacy.

So what if the neighbor kid's drone keeps flying, passes over the farmer's house down the road, and the farmer shoots it down? Can the drone owner recover damages? That's the question raised by the groundbreaking Kentucky case Boggs v. Merideth. The shooter, Mr. Merideth, "was initially charged and prosecuted in Bullitt County, Kentucky for criminal mischief and wanton endangerment, but the judge concluded that the drone flight had constituted an invasion of privacy" and dismissed charges against him, Austermuehle wrote. The case has since moved to federal court, where the drone owner is seeking money damages and "asking for a declaratory judgment resolving the tension between the rights of drone operators and the rights of property owners. See Boggs v. Merideth, 16-cv-6-DJH (W.D. Ky).

"The question the drone operator asked the court to resolve in Boggs v. Merideth will have wide ranging implications no matter which way it is eventually decided," Austermuehle writes. "[W]hether the law eventually settles on viewing drones as airplanes and effectively lowering the navigable airspace (thus reducing property owners' rights)" or favors property owners "and views unauthorized drone flight over private property as akin to any other unauthorized entry onto private property, the outcome will implicate larger questions that will affect all of us on a daily basis," perhaps even including the government's right to conduct warrantless searches from the air.