The ISBA and Illinois law school deans want to give law school grads who haven’t taken the bar exam more options in the private sector. 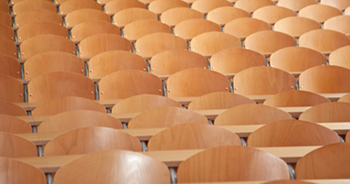 Recent University of Illinois College of Law graduate Matt Hartzler is among the lucky ones, after lining up a job with Katten at its Chicago office, where he’d like to practice trademark and copyright law. But he says he and his classmates are very much aware they are stepping into a marketplace dismantled by the global COVID-19 pandemic.

“The general mood among my friends is one of vigilant flexibility,” Hartzler says. “It seems like the only way to proceed as a graduating law student is to be comfortable with change. The bar exam has a new date. Will it stay there? Some firms are deferring hiring to January 2021. Will that be the norm or the exception in the Chicago market? By the time this comes to print, I suspect a lot will have changed. The only thing that’s clear is that this next crop of attorneys is going to have to be OK with uncertainty.”

The need for flexibility also is on the minds of ISBA leaders, who, with the deans of all nine Illinois law schools, collaborated on a proposal to amend Illinois Supreme Court Rule 711 in the hopes of expanding job opportunities for law school graduates whose careers and financial prospects may be on hold due to the pandemic. The ISBA and the deans joined forces after Illinois Supreme Court Chief Justice Anne Burke encouraged the two groups to work together after learning they were writing similar, but independent, proposals. A melded proposal was submitted to the Supreme Court in early May. The goal is to expand opportunities for law school graduates who will be waiting until September to take the bar exam, with admission not likely to take place until early 2021.

Rule 711(c) already allows law school students and graduates to perform a wide variety of legal services under the supervision of a licensed attorney in good standing. But that provision is limited to positions in government agencies and nonprofit organizations, such as legal aid clinics. (In May, the ISBA published a Professional Conduct Advisory Opinion clarifying the types of legal work nonlicensed law school graduates can perform according to current rules. See the 20-01 entire opinion.)

The ISBA/dean proposal would create Rule 711(g), which would allow law school graduates to perform the roles mentioned in paragraph (c), but in the private sector as well. The proposal also outlines other requirements, such as: how to obtain a provisional certificate to practice law under 711(g); that law school grads must complete a Basic Skills MCLE course within 60 days of working under the new paragraph; and what supervising attorneys must do when bringing a law student graduate under their wings.

The proposal states Rule 711(g) would apply to “December 2019 and all 2020 J.D. graduates of law schools” and “law school graduates from prior years who have been serving as judicial law clerks since their graduation who have not yet taken a bar examination in any jurisdiction but who have successfully completed all educational requirements to be eligible to take the Illinois bar examination.” Private-practice privileges for law school grads would “continue through October 31, 2021 or until 30 days after the covered graduate receives the results of the first bar examination taken after establishing Rule 711(g) license, whichever occurs sooner.”

“The proposed amendment should encourage firms to hire graduates before they’ve passed the bar,” says Daniel Thies, a shareholder in the Urbana-based firm Webber & Thies, PC, who functioned as a liaison between the deans and the ISBA as they worked on the unified proposal. Thies is involved with sections and committees regarding legal education with both the ISBA and American Bar Association (ABA). Through the ABA, he has become acquainted with Jennifer Rosato Perea, dean of Depaul College of Law, and Darby Dickerson, dean of the UIC John Marshall School of Law, both of whom took leading roles with drafting the Rule 711(g) proposal.

“Law grads can already do a lot of things, but they couldn’t, for example, go to court or take depositions.” Thies says. “On top of that, there’s a perception that if you’re not a graduate and not licensed, you should not be billed out—or that clients would be less likely to pay. The key, in my view, is that bolstering the status of law school grads—to make them provisionally licensed—changes the perception of their value and makes it more economically viable to hire them.”

Thies, who graduated from law school during the Great Recession, and Hartzler, whose brother graduated from law school at that time, are well acquainted with uncertainties. While Thies published an article on the impact of the recession on the legal sector that provided nuggets of information used in a letter to the Supreme Court introducing the proposed Rule changes, Hartzler isn’t sure what kind of impact the proposed Rule 711(g) will make.

“The thing I don’t really understand about the Rule 711 expansion is how it helps private firms all that much. If graduates were able to work at firms as law clerks before getting sworn in—or after failing the bar the first time around—then isn’t that status quo enough? Maybe it makes us more marketable? I can’t speak to what smaller firms need out of young associates. But maybe this is going to be really helpful for them.”

ISBA President David Sosin says at first glance the proposal may not appear substantial. But he says law school grads deserve to be elevated to a status beyond that of a paralegal or clerk. (The proposal’s introductory letter cites 11 other states that already have extended their provisional practice rules. These states include Georgia, Indiana, Massachusetts, Missouri, New Jersey, New York, Pennsylvania, and Texas.)

“The expansion of the 711 rule may seem like a very minor one,” Sosin says. “As shown by the research, a number of states have specific rules or opinions that allow law school grads to work for lawyers, pending bar completion. Some allow court appearances on routine matters and some permit client interviews and other client contact. Illinois now has an approved ethics opinion that recognizes that existing personnel and paraprofessionals are already permitted to perform limited legal work in law offices, provided they are supervised. Law school grads should have the same privilege as sanctioned by this Rule. Granted, the Rule is not as expansive as some states.”

Thies says he understands why law students are increasingly pushing for diploma-based privileges. But he says the proposed rule change is meant to assist graduates while also protecting the public and the profession. “Our proposal is a far cry from diploma privilege,” Thies says.

In light of the economic disruptions caused by COVID-19, the possibility of granting diploma privileges—or at least discussing it—may not be far away. Some are warming to the idea.

“Instead of postponing the Illinois Bar Exam set for this summer, now would be a great time for Illinois to follow the lead of Wisconsin and not require the exam for those graduating from Illinois law schools,” says Associate Judge Martin Mengarelli of the Third Judicial Circuit. “The bar exam is no indication of legal ability. After practicing law for 21 years, in which I prosecuted legal malpractice cases, and now having been on the bench almost six years, I have seen attorneys who had to take the exam multiple times who do a great job once they become licensed and I have seen those who passed the exam on the first try who don’t know how to practice law. Law graduates should be able to get into the workforce as soon as possible to start paying off their loans. Future employers would also benefit by knowing the person they offered to hire can start working upon graduation.”

The ISBA will continue to examine ways to assist law school graduates who are entering the marketplace. And its partnership with the law school deans may indeed set the stage for future collaboration and innovation.

“We are blessed in Illinois with deans of our nine law schools who are progressive, forward thinking, and fiercely dedicated to the welfare and education of their students,” Sosin says.

The ISBA’s Board of Governors approved three Professional Conduct Advisory Opinions on May 15 during its regularly scheduled meeting.

The opinions address: the duties of an in-house counsel when confronted with conduct that may be harmful to his or her employer; when a lawyer threatens criminal charges to gain an advantage in a civil matter; and the propriety of a firm name of “X and Y” when “Y” has changed careers and no longer practices law.

Opinion 20-03 addresses when a lawyer threatens criminal charges to gain an advantage in a civil matter. The opinion concludes by indicating that in a demand letter, a lawyer may accurately set forth the law—including the possibility of civil and criminal liability—as well as including a copy of the applicable statute. However, a lawyer would be prohibited from stating that criminal liability could be avoided by complying with the demand.

Opinion 20-04 addresses the propriety of a firm name when one of the named lawyers has changed careers and no longer practices law. The opinion also discusses the availability of the designation “of counsel” to a lawyer no longer practicing law with the firm, finding that such a designation would be inappropriate.