ISBA’s first president from Madison County reflects on the beginning of his altered, but undeterred, term. 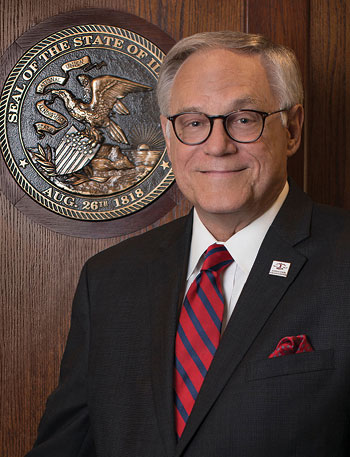 I am honored to serve as the 144th President of the Illinois State Bar Association and to be the first attorney from Madison County to serve in this capacity. As only the second graduate of the Southern Illinois University School of Law to hold this position (the first being my friend Tim Eaton of Chicago, by way of Decatur), I take pride in my southern Illinois roots and accept the challenges of leadership during these troubled times.

Little did I know that my service as president would begin with a worldwide pandemic that would affect all of our lives and our profession. This column was written in mid-May while Illinois continued under its Gubernatorial Disaster Proclamation and when most of the state remained locked down. While Gov. Pritzker has released his plan to “Restore Illinois,” we are contemplating how to restore and renew our careers.

As I reflect on how this pandemic has affected plans for my year as president, I am reminded of the summer of 1993, when, shortly after Tom Leahy was installed as the 117th president of the ISBA, the Great Flood of 1993 hit Illinois towns along the Mississippi River. I remember how Tom’s plans for his year were sidetracked as he launched the ISBA Flood Task Force, which he asked me to cochair along with former U.S. Senator Alan Dixon. We traveled to “Flood Forums” in five Illinois cities along the Mississippi River delivering a message on how Illinois lawyers stood ready to help those impacted by that disaster.

No doubt COVID-19 will have an impact on my entire year as president and beyond. Travel plans, meetings, and events that were scheduled during the four months leading up to my installation and for the four months thereafter have been canceled, including the ISBA Annual Meeting in St. Louis. My thanks to the Illinois Supreme Court—and Justices Lloyd Karmeier and Rita Garman in particular—for their willingness to participate in an alternate installation ceremony, which was held in the Illinois Supreme Court’s courtroom in Springfield on June 19.

When I chaired the Scope and Correlations Committee of the Board of Governors while I served as the second vice-president of the ISBA, I recommended the ISBA encourage its committees and section councils to have at least one Zoom or video-conference meeting per year with the expectation that it would be increased to two such meetings during my year as president. My hope was to provide greater access to downstate members and to save expenses in the process. Little did I know then that the COVID-19 pandemic may cause me to be known as the “ISBA Zoom President,” with Zoom meetings becoming the norm rather than the exception.

Our association will be faced with great challenges and economic pressures as a result of the pandemic. I suspect the practice of law as we know it will be changed forever. Courts and law firms throughout Illinois are adopting plans to use technology to restructure ways they conduct business while keeping all parties safe.

I am proud to be part of the ISBA team responding to this crisis and pledge to continue the hard work necessary to serve our members and the legal community. (As you can see by the alternative covers in front of this issue, we must also take time to smile and not take ourselves too seriously. Please vote for your favorite alternate cover.) In my August President’s Page column, I will outline the initiatives I intend to pursue during my year as president. In the meantime, may you and your loved ones continue to remain safe and healthy during this trying time.

Editor’s Note: This article was submitted before the senseless death of George Floyd and the civil unrest that followed.