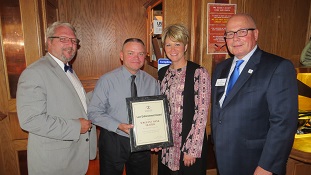 The ISBA’s Law Enforcement Award was created to recognize sworn law enforcement officers for conduct that promotes justice and to distinguish those individuals whose service to the public brings honor and respect to the entire criminal justice system. It recognizes those who excel in law enforcement.

Frazier was acknowledged for his involvement in many rescues of persons who have fallen off unmarked trails at Starved Rock State Park. His actions have saved lives and minimized injuries to numerous park visitors. He has been outspoken in his criticism of the cutbacks in conservation police forces for state parks. He has also been involved in non-police activities including serving on volunteer fire departments and a variety of community and fraternal organizations.

Frazier was nominated by attorney James T. Reilly of Streator.

“Hank Frazier has a true love of the outdoors and has been a definite asset to the preservation of what I consider our state’s crown jewel of the outdoors,” Reilly said. “He has always been honest and respectful and is a credit to his badge.”

The Illinois State Bar Association is a voluntary organization of 33,000  members that provides professional services to Illinois lawyers and education and services to the public. For more information, visit isba.org.