By minimizing the need to appear in front of Illinois courts, the Uniform Interstate Depositions and Discovery Act reduces the complexity and cost of litigating across state lines. 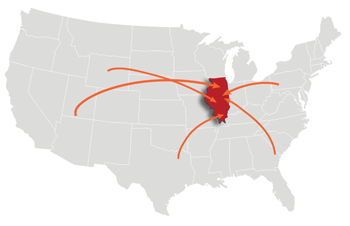 On July 20, 2015, Governor Rauner signed Senate Bill 45 into law, which enacts the Uniform Interstate Depositions and Discovery Act. The Act, which has been adopted in 38 states and introduced in three others, makes it easier for a non-Illinois litigant to serve a subpoena on an Illinois resident.

Prior to passage of the Act, out-of-state litigants seeking to subpoena a witness or entity in Illinois had to comply with Illinois Supreme Court Rule 204(b), which requires that a petition be filed with the court located in the county where the witness resides, is employed, or transacts business. For example, if a person located in Virginia sues another Virginia resident for defamation, odds are that most of the witnesses are located in Virginia. But what if the lawsuit involves a defamatory statement made by an anonymous poster on the Chicago Tribune's website?

In order to subpoena a Tribune employee for a deposition to obtain information related to the anonymous poster, the Virginia attorney would have to issue a subpoena in Virginia. The party would then need to hire local counsel in Illinois to file a petition with the Circuit Court of Cook County, obtain an order from the court, and then cause a subpoena to be issued in Illinois.

Such a process can be costly and time-consuming, says Moline attorney Robert T. Park. He notes that this issue can arise in many scenarios, but is very likely when litigation is taking place in Missouri, Wisconsin, or other neighboring states.

For example, if a treating doctor or witness to an accident lives in Illinois but the litigation is taking place in Iowa, Supreme Court Rule 204(b) would have normally controlled the process for obtaining a subpoena. Under the Act, he says, the process is streamlined - the out of state attorney can follow the Act's simpler process and obtain a subpoena in a much shorter timeframe.

Still a role for local counsel

Under the Act, an out-of-state litigant seeking to subpoena an individual or entity located in Illinois must simply submit a subpoena issued in a foreign state to the clerk of court in the county in which the discovery is sought. The clerk is then required to promptly issue an Illinois subpoena for service upon the individual or entity.

While this streamlines the process, it does not change the fundamental rules of discovery across state lines. The Act still requires that the discovery be conducted in the county where the witness is located.

For example, if an automobile accident takes place in St. Louis but one of the witnesses lives in Belleville, a Missouri attorney would first need to issue a subpoena pursuant to Missouri state law. The subpoena would then be submitted to the St. Clair County Clerk of Court, who would then issue a valid Illinois subpoena. The subpoena would be served according to the Illinois Supreme Court rules.

The witness could only be deposed in St. Clair County. Any motions to enforce, modify, or quash the subpoena would be governed by Illinois state law.

The Uniform Law Commission first promulgated the Act in 2007. It states that the Act helps minimize litigation costs while also protecting out-of-state witnesses. "The Act recognizes that the discovery state has a significant interest in protecting its residents who become non-party witnesses in an action pending in a foreign jurisdiction from unreasonable or burdensome discovery requests." See http://bit.ly/1J21HUX.

Although the Act streamlines the process of conducting discovery in a foreign state, it does not necessarily remove local counsel from the equation, says Park, who is an attorney at Califf & Harper, P.C.

While local counsel would no longer be needed to file a petition and obtain a subpoena, Illinois attorneys might still be needed to conduct depositions and would be required to handle any court proceeding to enforce, modify, or quash the subpoena. "It would still make sense for out-of-state lawyers to use local counsel," Park notes.