A Cook County judge rules that the Illinois Constitution guarantees a right to a 12-person jury. 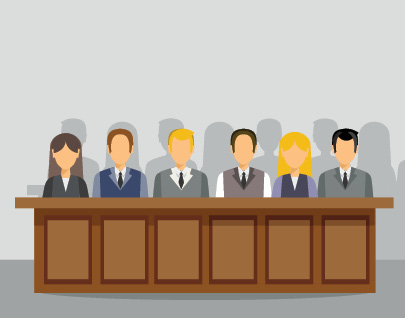 On December 21, 2015, Judge William E. Gomolinski of the Circuit Court of Cook County issued a 27-page memorandum opinion and order holding that the Illinois Constitution guarantees a right to a 12-person jury, declaring 735 ILCS 5/2-1105 unconstitutional.

Article I, Section 13 of the Illinois Constitution

The statute, which was amended by Public Act 98-1132, changed the size of juries in civil trials from 12 to six members. It took effect on June 1, 2015. Twenty-nine days later, a civil lawsuit was filed in the Circuit Court of Cook County's Law Division, commonly known as Kakos v. Butler, 2015 L 6691.

On August 27, 2015, some of the defendants attempted to file an appearance and 12-person jury demand. The Clerk of the Court refused to accept the defendants' payment for a jury of twelve. The defendants filed a motion to have the six person jury amendment in PA 98-1132 declared unconstitutional.

Gomolinski began his analysis with Article I, Section 13 of the Bill of Rights to the Illinois Constitution, which reads: "The right of trial by jury as heretofore enjoyed shall remain inviolate." Gomolinski found that "the right 'as heretofore enjoyed' included a right to a jury of twelve."

With this background, the court turned to the parties' arguments. The plaintiffs argued that the interpretation of what constitutes a jury has changed over time, pointing to the fact that a jury is now understood to be composed of 12 members, not 12 men. The court rejected this argument, stating: "Reading 'men' to mean 'persons' is far removed from reading 'twelve' to mean 'six, and no more.' One involves the application of present-day norms of equality and fairness, while the other is simply factually incorrect."

The court found that the history of the Illinois Constitution provides "convincing evidence" that the legislature does not have the authority to alter the size of juries in Illinois. Gomolinski also opined that the Illinois Supreme Court has, on several occasions, defined the jury right as one involving a 12-person jury. "Were the present amendment to Article I, section 13 to appear before the Illinois Supreme Court, it would not survive a constitutional challenge because it fundamentally alters the jury trial right form the one that existed at the time of the adoption of our current constitution."

The plaintiffs argued that in Williams v. Florida, 399 U.S. 78 (1970), the Supreme Court of the United States ruled that six-person juries were sufficient to satisfy the constitutional guarantees of both civil and criminal trials by jury. Gomolinski distinguished the Sixth Amendment right to a trial by jury from that of the right guaranteed by Article I, Section 13. "Our state jury trial right is substantively different from the one afforded by the federal Constitution, and our supreme court has found the state protections to be broader."

The Gomolinski opinion also discusses separation of powers and public policy. He found that even if the language of the Act is not unconstitutional on its face, the General Assembly can not encroach on the administration of the courts, which is the sole domain of the Illinois Supreme Court. As to public policy, he found there was evidence that smaller juries do not represent an accurate cross-section of the public and that decreasing jury sizes decreases the accuracy and predictability of verdicts.

Chicago attorney Bruce Pfaff, a partner at Pfaff, Gill & Ports, Ltd., says that he is "agnostic" about trying cases before juries of six or 12 members. There is no "magic" in 12, he says, but he feels Judge Gomolinski's decision could have gone the other way.

He believes that the most important part of PA 98-1132 is the increase in juror pay, which was not invalidated by Gomolinski's order. Because jurors are so poorly paid, it is hard to get representative jurors since many low-wage workers don't get paid if they miss work for jury duty. Because jurors are often excused for economic hardships, he does not see many low-wage workers on juries, he says. As to the court's ruling, he feels that it was a "thoughtful, well-reasoned opinion."

Robert T. Park of Moline, with Califf & Harper, P.C., did not expect the court to go beyond an analysis of the 1970 Constitutional Convention. He thinks that the court's discussion of the separation of powers issue makes it more likely that the Illinois Supreme Court will affirm. "There are specific [supreme court] rules that talk about 12-person juries that would be ineffective," he says.

Ultimately, the case comes back to the constitution, Park notes. "Even if everyone agrees that the policy [behind reducing jury size] is sound, you still have to address the constitution." He stresses that there is a difference between expanding the potential pool of jurors and changing the number of people on a jury. What is definitive for Park is that the delegates to the 1970 Constitutional Convention rejected proposals that would have allowed the General Assembly to change the jury right. Whether the courts of review find it equally persuasive remains to be seen.