Chicago-based Valorem Law Group offers second opinions to clients who have questions about the legal advice they've been getting. 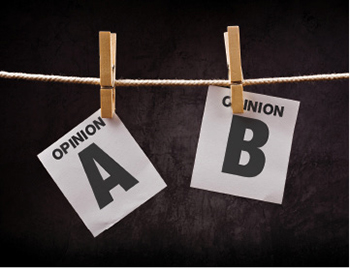 When patients get a life-changing medical diagnosis, they often seek a second opinion. When clients have questions about the direction that their legal counsel takes, they may think they have nowhere to turn.

In fact, attorneys can provide clients with second opinions, although most do not advertise them as a service. Valorem Law Group in Chicago is one of the first law firms to feature second opinions as part of its practice. Valorem, also known for its alternative fee agreements (see the October 2014 IBJ cover story), has been providing legal second opinions to individuals and companies for the past two years.

The ethics of second opinions

Some attorneys may wonder if offering second opinions is ethical. (See, for example, an ABA GPSolo Section SoloSez discussion thread on the topic at http://bit.ly/2rQCkDy.) In Illinois, Rule 4.2 of the Rules of Professional Conduct prohibits an attorney from communicating with a party the attorney knows is represented by counsel. However, Comment 4 to the Rule states that it does not "preclude communication with a represented person who is seeking advice from a lawyer who is not otherwise representing a client in the matter." This language covers legal second opinions.

So how does providing a second opinion work in practice? Valorem charges a fixed fee for second opinions while aiming for a quick turnaround, typically no longer than two weeks.

The firm informs the client what information it needs to render the opinion. Once the information is gathered, Valorem immerses itself in the issue, ultimately providing a written opinion, followed by a discussion with the client. In some situations, the client only requests an oral presentation.

Auerbach says that so far, no law firms have approached Valorem for its second opinion services. "It would be a rare firm that would be willing to pay another to get an objective opinion of the work they are doing." Still, Auerbach says that Valorem works very well with other firms. Its goal is to provide a totally neutral and objective opinion, not "swoop in and take over" representation from another law firm.

When asked about the types of matters clients bring to Valorem, Auerbach says that it is "truly across the board." Often, the firm is asked to review important documents such as summary judgment briefs or motions to compel or for sanctions. Clients want Valorem to weigh in on the strategy and whether the points are being made accurately.

The firm has also been asked whether a matter should be appealed or whether a lawsuit should be filed in the first place. They are also asked for opinions about resolving matters when they have been going on for a while and costs are rising.

Some may wonder whether the client is waiving privilege by seeking a second opinion. According to Auerbach, since the client is retaining Valorem like any other engagement, the information is confidential and privileged. What's more, because the work is done as part of or in anticipation of litigation, attorney-client privilege applies. The firm is very careful to discuss matters only with people who are already in the zone of privilege.

The firm also does not disclose the names of clients that have hired it for a second opinion. Some do not even tell their other counsel that they have sought a second opinion. The opinions themselves are attorney work product and not discoverable.

Auerbach briefly discussed Valorem's second-opinion service at the Illinois Supreme Court Commission on Professionalism's The Future Is Now: Legal Services 2.017 conference in Chicago in May.