A Busy Start to an Unusual Year 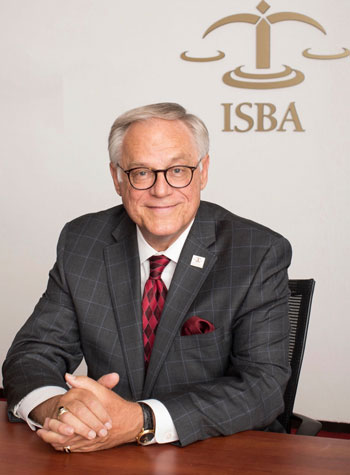 Since I was sworn in as ISBA president on June 19, I have been busy carrying out the work of our Association. This year has presented challenges as well as opportunities for the ISBA. After presiding over the first-ever Zoom Assembly meeting, the Association’s officers and I met to select members of the steering committee cochaired by Dr. Mary Milano and Kenya Jenkins-Wright that will guide the implementation of the Racial Inequality Resolution overwhelmingly passed by the Assembly in June (see “All Things Being Equal,” in the August Illinois Bar Journal). I have asked First Vice-President Anna Krolikowska to be our liaison to the committee, which, by the time this issue went to press, had already met twice and is off to a good start.

I have chaired two Board of Governors meetings and directed many of our substantive committees and section councils to review and comment on the joint Chicago Bar Foundation-Chicago Bar Association Task Force Report on the Sustainable Practice of Law & Innovation. After considering comments from our membership, the Board of Governors conducted a thorough examination of the report and offered comments on behalf of the ISBA regarding the report’s more controversial aspects. I will provide more perspective on this report in a future President’s Page.

I also have participated in several meetings with Illinois Supreme Court Chief Justice Anne Burke to discuss the ISBA’s joint sponsorship of her Access to Justice Listening Tour. These virtual listening tours are being held throughout Illinois, beginning with an event that took place in Madison County soliciting comments from those in the Third and Twentieth judicial circuits. The second event took place in Whiteside County in northwestern Illinois. The virtual tour is an opportunity to elicit feedback from invited members of the judiciary, law enforcement, and the practicing bar concerning present-day issues relating to the court system. I look forward to participating in additional listening tour events, which will continue to take place in the coming months.

From July 29 through Aug. 4, I attended the virtual 2020 Annual Meeting of the American Bar Association. This included a virtual meeting with bar leaders at the National Caucus of State Bar Associations. We heard from outgoing ABA President Judy Perry-Martinez and incoming ABA President Patricia Lee Refo and discussed resolutions appearing on the House of Delegates’ agenda. On Aug. 3-4, I joined with the Illinois delegation to attend the first-ever virtual American Bar Association meeting of the House of Delegates.

From Aug. 25-27, I attended the virtual National Conference of Bar Presidents (NCBP) Annual Meeting, where bar association leaders from around the country met to share information about successful projects and programs, some of which may be beneficial to the lawyers of Illinois. Unfortunately the Great Rivers Conference, which was scheduled for late October, has been cancelled due to COVID-19. This event brings together bar leaders from nine states throughout the Midwest. As with the NCBP, leaders also exchange information about initiatives that may benefit lawyers in our state. Relationships made during past such events have been beneficial to me, in that I have been able to keep in close touch with bar presidents in surrounding states.

Last but not least, on behalf of the ISBA, I attended a virtual reception hosted by the Southern Illinois University School of Law alumni welcoming Camille Davidson as the law school’s new dean.

All ISBA committees and section councils continue to meet virtually and carry out the work of the Association. I am particularly proud of efforts being made by the Special Committee on the Rural Practice Initiative. This committee has met on several occasions and has developed an aggressive timetable to address the growing need for young lawyers in less-populated areas of our state.

As always, I hope you and your families remain healthy and safe.