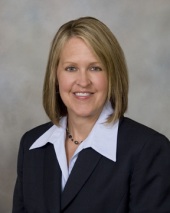 The Illinois Supreme Court has announced today that Marcy L. Buick received most of the votes cast by the circuit judges in the Sixteenth Judicial Circuit and is declared to be appointed to the office of associate judge.

Ms. Buick received her undergraduate degree in 1986 from the University of Illinois in Urbana, and her Juris Doctor in 1990 from Northern Illinois University in DeKalb. Ms. Buick is currently engaged in practice with The Foster & Buick Law Group, LLC in Sycamore,
Illinois.