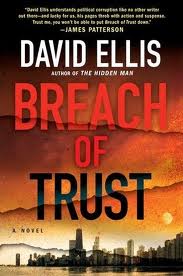 David Ellis, the author of Breach of Trust, is a lawyer on the staff of the Speaker of the Illinois House of Representatives, Michael Madigan. He was the chief impeachment prosecutor on behalf of the Illinois House pursuing the impeachment of Governor Rod Blagojevich at the Illinois State Senate where the governor was convicted and removed from office. Ellis’ real life experience and the knowledge he acquired proved invaluable and fantastic as research and background to write this realistic, timely, and riveting novel.

Breach of Trust is a fast paced political thriller with murder, violence, and continual suspense as fictional hero, Jason Kolarich, a former prosecutor and acclaimed defense attorney, goes underground to settle a score. In the process Ellis has Kolarich pursue this saga with several of Ellis’ characters from his other works of fiction. Ellis cleverly unveils the levels of deceit, corruption, and intrigue in the politics of Illinois government.

The hero uncovers the illegal fundraising and shakedowns by a character named Charlie Cimino, who calls to mind William Cellini, recently found guilty by a federal jury in real time in Chicago. I read the book as I read the newspaper accounts of the Cellini trial and it was hard to separate and distinguish the details. The book has many twists and turns taking us from street gangs and their violence to the office of the governor of Illinois. The book displays the high-level trading of appointments for political endorsements and contributions as well as the awarding of contracts in return for kickbacks and contributions. The accounts of fictional Governor Snow makes one think of our own real life former governor Rod Blagojevich.

Ellis is a master storyteller and the book is loaded with surprises not just at the end but also throughout the entire book as plots and subplots unfold. One friend I suggested reading the book complained that he lost sleep until he could complete the book since he couldn’t put it down. Life has its challenges and reading this book might divert your attention from other pursuits for a while. Enjoy!