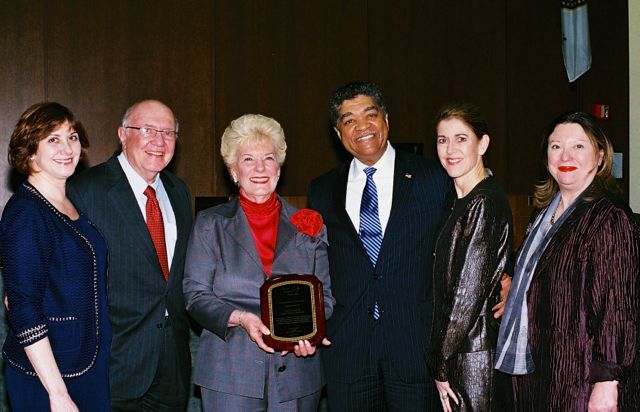 The Distinguished Service Award is intended to recognize judges who have demonstrated exemplary service to citizens, bench, and bar as shown by devotion to the law, efforts to improve the legal and judicial communities, reputation for honor, integrity, legal knowledge and diligent service, and otherwise distinguishing him or herself as an Illinois judicial officer.

Judge Bellows was first appointed to serve as a judge of the Circuit Court, Domestic Relations Division, by the Illinois Supreme Court in 1986. By being successfully retained by the voters, she continued to serve on the bench for 26 years. Prior to becoming a judge, she was an attorney for 26 years.

Judge Bellows made history as the first woman in the country elected to serve as president of a state bar association. She served as president of the Illinois State Bar Association from 1977-1978. She also was the first female member of the ISBA Board of Governors, serving from 1969-1979. Judge Bellows became the first female state delegate to the American Bar Association House of Delegates, serving from 1978-1988. In addition, she was the first woman to become chairperson of the Fellows of the American Bar Foundation. Judge Bellows has received numerous honors over the years in recognition of her legal service.

"Judge Bellows serves as a model of an outstanding judge," said Judge Novak, IJA president.” “She is devoted to her work and the community she serves.”

According to Cook County Chief Judge Timothy C. Evans, “She is universally known for her patience, strong work ethic and breadth of knowledge about family law.”