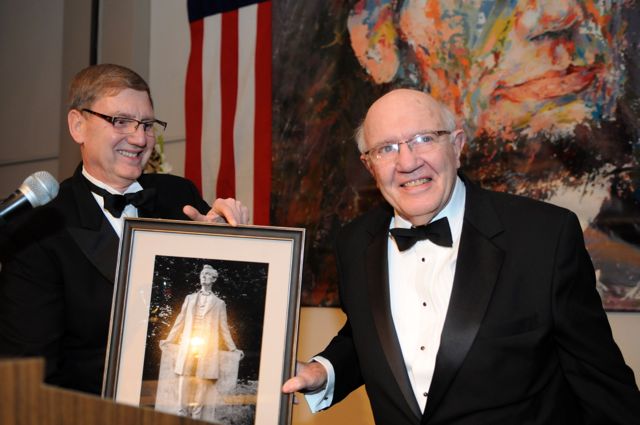 Urbana attorney Richard L. Thies was presented the prestigious “Lincoln the Lawyer” Award by The Abraham Lincoln Association (ALA) during the organization's annual Lincoln's Birthday Banquet February 12 in Springfield. Thies is just the eleventh person to receive the award, which recognizes individuals who reflect the character and ideals of Abraham Lincoln in their legal careers.

“For more than half a century, Richard Thies has served the interests of his clients with skill and integrity, has worked enthusiastically in support of countless civic and charitable organizations, and has provided leadership to the legal profession,” said ALA Board Member Thomas Johnson, who nominated Thies for the award. “Richard is an unfailing, unflinching exemplar of civic virtue and personal honor who is, in Vachel Lindsay's words, 'Lincoln hearted' – Lincoln hearted in every good way.”

Richard L. Thies received a JD Degree from the University of Illinois College of Law in 1955. He was admitted to the Bar by the Supreme Court of Illinois in 1955; to the U.S. District Court, Central Division of Illinois in 1958; to the 7th Federal Circuit in 1992; and to the Supreme Court of the United States in 1987. Thies served on active duty in the Judge Advocate General's Department of the United States Air Force from 1956-1958. Since that time he has been engaged in the general practice of law as a member of Webber & Thies, P.C., an Urbana-Champaign, Illinois law firm.

Thies has distinguished himself in numerous areas of law, including labor and employment; commercial, personal injury, and family litigation; communications, banking, real estate, health care, and environmental law; and trusts, wills, financial planning, and other individual legal services. He has also negotiated in the Peoples Republic of China on behalf of U.S. clients desiring to do business in China.