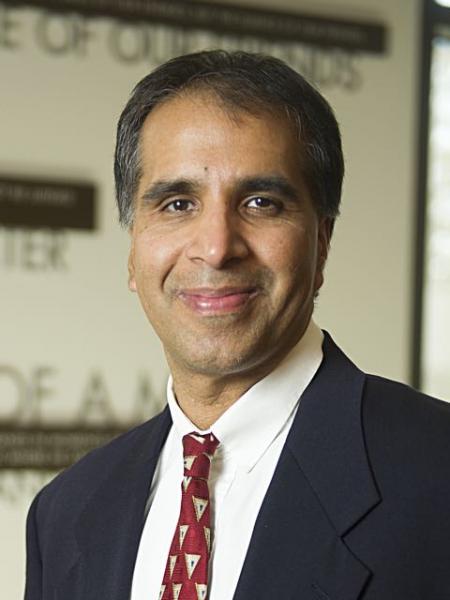 The University of Illinois has named Vikram David Amar as the next dean of the College of Law, pending approval from the University’s Board of Trustees at their July 15 meeting. Amar will assume the deanship, and also become the Iwan Foundation Professor of Law, on August 16. For the last several years, Amar has been the senior associate dean for academic affairs and a professor of law at the University of California, Davis School of Law.

“Professor Vik Amar stood out to all of us involved in this national search as the clear choice to lead the College of Law here at Illinois,” said Ilesanmi Adesida, the vice chancellor for academic affairs and provost of the Urbana campus. “His vision of a college recognized for its cutting-edge scholarship and for close connections to the profession and society in which its graduates will serve is one that aligns perfectly with the land-grant values of this university. He understands the challenges of providing world-class legal educational and professional experiences to our students while ensuring that those experiences remain affordable and accessible. I look forward to working with Dean Amar as he leads one of our oldest and proudest colleges to national and international pre-eminence.”

Amar said he has been “deeply impressed by the College’s highly productive and influential faculty in law and related disciplines, its dedicated staff, its talented student body, its loyal and accomplished alumni base, and its place in a premier research university located two hours from downtown Chicago, a city where the College is developing exciting programs for upper-division law students.”

Amar added: “The College is situated, literally and figuratively, between two of the most important legal venues in the world. Chicago is among the biggest, most sophisticated, and most diverse of legal markets, and Springfield, Illinois has helped produce both Barack Obama and Abraham Lincoln, the greatest lawyer in American history. My time at Illinois will be guided by the twin values that defined Mr. Lincoln’s career – lawyerly excellence in private and public practice, and a commitment to the highest professional and ethical values.”

During his seven years as associate dean at UC Davis, Amar has been extensively involved in faculty hiring, tenure, and promotions; clinical programming; admissions; career services; and curricular development. In addition to teaching at Davis, Amar has been a professor of law at UC Hastings and a visiting professor of law at UC Berkeley and UCLA.

Amar is a national authority in constitutional law, federal courts, and civil procedure. He has written a number of books and scores of articles in leading law journals. He is the co-author of a one-volume civil procedure treatise and is also a co-author on several volumes of the Wright & Miller treatise on federal practice and procedure. He writes a biweekly column on constitutional matters for justia.com, is a frequent commentator on local and national radio and TV, and has penned dozens of op-ed pieces for major newspapers and magazines.

A strong proponent of public and professional engagement, Amar is an elected member of the American Law Institute and has served as a consultant for, among others, the National Association of Attorneys General, the United States Department of Justice, the California Attorney General’s Office, the ACLU of Southern California, and the Center for Civic Education. For one year he chaired the Civil Procedure Section of the American Association of Law Schools.

Amar earned his bachelor’s degree from UC Berkeley and his J.D. from Yale Law School, where he was an articles editor for the Yale Law Journal. He then clerked for Judge William A. Norris of the United States Court of Appeals for the Ninth Circuit and for Justice Harry A. Blackmun of the United States Supreme Court before joining Gibson, Dunn & Crutcher, where he handled a variety of complex civil and white collar criminal matters.

At Illinois, Amar will prioritize: (1) increased engagement between the legal academy, the legal and business professions, and the public; and (2) Illinois’ commitment to educational affordability.

“Law deans need to do a better job of reconnecting the professoriate with the world of legal practice and public service. Illinois produces a lot of innovative scholarship, much of it interdisciplinary, but we have to be more energetic in highlighting and explaining what practitioners can learn from law professors – and vice versa,” Amar said.

He continued, “Another priority is to begin to restore affordability to legal education so that cost does not deter talented people from pursuing a law degree. True, great law schools require great personnel and programs, both of which cost money. But those of us privileged to serve in our great law schools must be ever vigilant to keep these schools within the reach of all persons of ability, especially the younger generation’s gifted aspirants who come from modest backgrounds—the next generation’s Abe Lincolns and Barack Obamas. That it one reason why I insisted, as a condition of my appointment, that my overall dean compensation be somewhat lower than the recent norm, both at Illinois and at other elite law schools. Relatedly, because administrative compensation, even at public universities, often includes many components (e.g., summer salary) that can be less visible, I will try to keep my compensation as dean transparent. These steps will not, of course, by themselves solve the affordability problem, but – as Lincoln well understood – you cannot get to your desired destination without first beginning to move in the right direction. And in the coming months our school will be creating and announcing new scholarships designed to promote access for excellent candidates of all kinds.”

Established in 1897, the University of Illinois College of Law enjoys a rich tradition of advancing discovery and research, training students in the knowledge, skills, and temperament to achieve professional excellence and leadership, and promoting beneficial change in law and society. One of the oldest and best-known law schools in the nation, the College of Law is part of the University of Illinois, the state’s flagship land-grant university and a global leader in research, teaching, and public engagement.