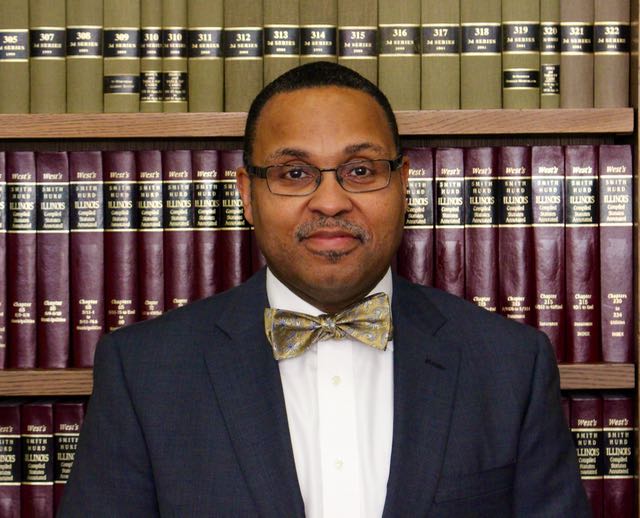 “For the last 13 years, I have observed Judge LeRoy Martin emerge as a rising star in the judiciary,” Chief Judge Evans said.

“He has acquired a reputation for great legal knowledge, unquestioned integrity and a strong work ethic, and as one who always remembers what it was like to practice law and, therefore, treats members of the bar and their clients like he wanted to be treated during his 18 years as a practicing lawyer: Namely, listening closely to their presentations as submitted to him as a judge, applying the law to the facts as he ascertained them to be and always extending respect to those appearing before him.”

A South Side native, Martin will serve alongside the 42 judges assigned to the Criminal Division, which last year disposed of 22,487 felony cases.

The Criminal Division hears most felony cases originating in Chicago in its courtrooms located in the Leighton Criminal Court Building at 26th Street and California Avenue. It also has courtrooms at the courthouses in Skokie and Bridgeview, which hear felony cases that originate in Chicago, as well.

“I am both humbled and honored that Chief Judge Evans would consider me for this position. And I look forward to serving with the hardworking judges of the Criminal Division,” Martin said.

Martin, 55, is the first African-American to serve as presiding judge of the Criminal Division.

The Judicial Performance Commission, established by Chicago Appleseed Fund for Justice and the Chicago Council of Lawyers, has previously said that Judge Martin “draws praise for a good legal ability and temperament. He is considered thoughtful, open to arguments and well-prepared.” The Chicago Bar Association has previously reported that Judge Martin “is dedicated, has an excellent demeanor and receives high marks from the attorneys who appear before him. Judge Martin has worked diligently in his Chancery assignment and is a credit to the bench.”

Martin graduated from DePaul University in 1981 with a bachelor’s degree in history and from North Carolina Central University School of Law in 1984.

He began his legal career at Milton N. Blumenthal & Associates, where he represented plaintiffs in personal-injury cases.

He became a Cook County Assistant Public Defender in 1985, defending juveniles accused of felonies and misdemeanors. Martin also represented parents accused of child abuse and neglect in matters when the state filed actions to remove the children from the parents’ custody.

Martin entered private practice in 1987, forming the law firm of Martin & Duckworth. As part of that private practice, he represented defendants accused of felonies, including murder, in the Criminal Division, where he will now serve as presiding judge.

Martin formed a solo law practice in 1995, representing parties in both civil and criminal cases.

“I was very passionate about protecting the constitutional rights of anyone I represented. I’m such a believer in the Constitution and the idea that our system of justice is a model for every other justice system,” Martin said.

“I thought as an advocate, that it was my role to make sure the system would work for everyone – that truly justice would be blind.”
“But I acknowledge the importance of the entire process, not just that individuals accused of crimes have rights, but people who are victims have rights as well. They look to the court system for justice. And we hold people accountable for their decisions or their actions.”
In 2002, the Illinois Supreme Court appointed Martin to a judicial vacancy in the Cook County Circuit Court. Voters elected him to the Cook County Circuit Court bench in 2004 and retained him in 2010.

In his judicial career, Martin has served in a variety of assignments.

He started in the First Municipal District in the Traffic Section. He occasionally presided over misdemeanor cases at branch court at 3150 W. Flournoy St., near West Harrison Street and South Kedzie Avenue.

Martin’s most recent assignment has been in the Chancery Division, which he joined in July 2007, where he handled class-action lawsuits and complex matters including stockholder derivative suits (for example, filed by company stockholders who allege that the company acted inappropriately, such as not properly splitting shares among stockholders); mandamus matters (such as an action against a government official to do something a plaintiff is alleging the government official is required to do); multimillion-dollar insurance disputes; and injunctions.

“Judge Martin is an extremely able, intelligent and hardworking jurist who is an excellent problem solver. He is able to get along with everyone and has outstanding interpersonal skills,” Jacobius said. “He made major contributions to the Chancery Division, and the judges as well as attorneys who appeared before him in the Division will miss him. I know he will be an extremely positive force in the Criminal Division.”

“I appreciate the efforts of Chief Judge Evans to bring to the Criminal Division a judge of integrity with a broad background in both criminal and civil law. Judge Martin has expressed a willingness to do everything he can to further the aims of the court in the interest of justice,” said Kazmierski, who served as Acting Presiding Judge since Biebel’s retirement.

Clay said: “This is an excellent choice to lead the criminal justice system at this time. Given Judge Martin’s background, training and experience, this is a quality selection. This is a person who is committed to the administration of justice, and we appreciate Judge Evans’s thoughtfulness in bringing him to this position. He will be an excellent leader.”

Martin believes educational and athletic pursuits can make a difference in the lives of others less fortunate than he – and has often volunteered his services in the inner city. He coached an Amateur Athletic Union (AAU) basketball team consisting of teenagers from the South and West Sides, and many of the teenagers that Martin coached from 2006 through 2010 went on to college.

“These kids needed to see positive male role models because many times in their neighborhoods, they didn’t see that,” Martin said.
A married father of two, Martin is the son of Constance Martin, a retired Chicago public school principal, and the late LeRoy Martin Sr., who served as superintendent of the Chicago Police Department.

Martin has previously served as an adjunct professor at Loyola University Chicago School of Law, as part of a four-teacher rotation teaching a class on trial practice.

In addition, the Illinois Supreme Court appointed him to serve on its Civil Justice Committee, studying ways to improve the civil jury trial system. He also serves on The Chicago Bar Foundation Board of Directors; the CBF is the charitable arm of The Chicago Bar Association.