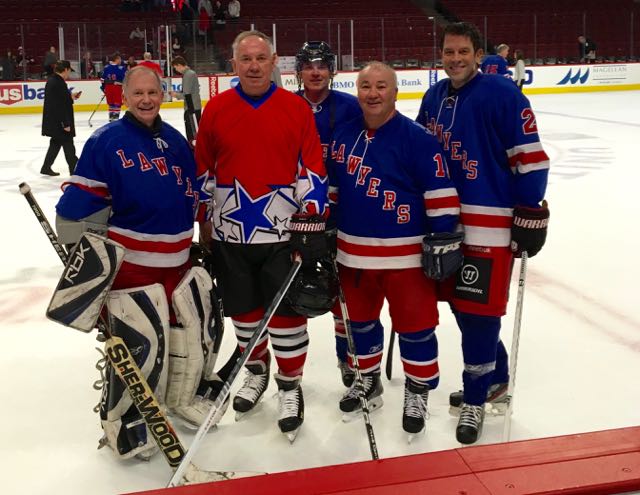 With the assistance of former NHL and Chicago Blackhawks’ players, local celebrities, and members of the Bar and Bench, the legal community came together on Sunday, December 20, 2015 at the United Center before the regularly scheduled game between the Blackhawks and the San Jose Sharks, to raise funds for the Chicago Legal Clinic.

The Chicago Legal Clinic has a 34-year history of providing legal services to the poor and elderly in the Chicago area.  Founded as the South Chicago Legal Clinic by DePaul College of Law classmates the Most Rev. Thomas J. Paprocki, Bishop of Springfield, and Edward Grossman, longtime Executive Director, the Clinic serves a host of legal needs focusing primarily on vulnerable populations, such as immigrants, the disabled, victims of domestic violence, those facing foreclosure, children in the midst of divorce, consumers with serious debt issues, and those confronting urban environmental problems.

As hundreds looked on, the All-Stars featuring former standout players such as Cliff Koroll, current radio analyst Troy Murray, Reggie Kerr, Joe Charbonneau, along with Hockey Hall of Fame television broadcaster Pat Foley, among others, faced off against the Lawyers composed of such luminaries as Bishop Paprocki, Congressman Mike Quigley, CBS2’s Rob Johnson, C.J. Koroll, Kevin Magnuson, and others, in a contest won in thrilling fashion by Lawyers 8-7.

Bishop Paprocki is immensely grateful to the Chicago Blackhawks organization, and the Wirtz Family in particular, for their generous support. “Rocky Wirtz has been terrific in helping us (The Chicago Legal Clinic) with these fundraisers, a relationship that began with his father, Bill Wirtz, many years ago.”

Grossman echoed Paprocki’s sentiments. “Through the efforts of the Blackhawks, especially Peter Hassen, Community Relations Director, this has become a tremendous event for the clinic and we are most grateful.  The relationship is mutually affirming in that the Clinic was pleased to honor the Blackhawks charities at its Annual Awards Banquet in 2014 for its outstanding service to the community. I am glad the Clinic and the Blackhawks are able to help each other in making the Chicago area a better place to live.”

Following the All-Stars-Lawyers game, supporters mixed with the players and Hockey Hall of Fame member and Blackhawk legend Denis Savard for cocktails and dinner at the United Center. Attorney Steve Demitro, president of the Masters Hockey League and the Lawyers team, presented Cliff Koroll with a bound copy of U.S. Congressional Record in which Congressman Quigley, recognized Koroll’s achievements in giving back to the community through his activities with the Chicago Blackhawks Alumni Association college scholarship program, Ronald McDonald House, and the Chicago Legal Clinic.

Additional information on the work of the Chicago Legal Clinic may be found at www.clclaw.org.