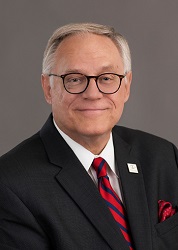 Dennis J. Orsey, a general practice attorney in Granite City who concentrates his practice in representing downstate police and fire pension funds, was installed today as president of the Illinois State Bar Association (ISBA) at the Illinois Supreme Court building in Springfield.

He is the first ISBA president elected from Madison County.

During his year as president, Orsey will concentrate on several initiatives, including the Rural Practice Initiative, which will promote access to justice in rural communities and will work with law schools and young lawyers to entice attorneys to practice there. This initiative will also address law school debt and will examine the challenges in finding legal jobs sufficient to both pay off debt and begin practicing law. Orsey will also continue to champion the ISBA Leadership Academy, which was launched in 2019 with the aim of training attorneys to develop the necessary skills to take on leadership positions within the ISBA and the legal profession.

In his early career, Orsey served for 11 years as an assistant attorney general and regional office director of the Granite City Regional Office, which serviced an eight-county area. Orsey established his own general practice law firm in 1995 in Granite City. Since 1997, Orsey has served as deputy general counsel for the Illinois Public Pension Fund Association and represents over 50 police and firefighter pension boards. After serving for many years on various ISBA sections, committees, and the Assembly, he served three terms on the Board of Governors before being elected as Third Vice President in 2017. Orsey was the recipient of the ISBA Board of Governors Award in 2013.

Orsey received a bachelor’s degree from the University of Illinois and a J.D. from Southern Illinois University School of Law.