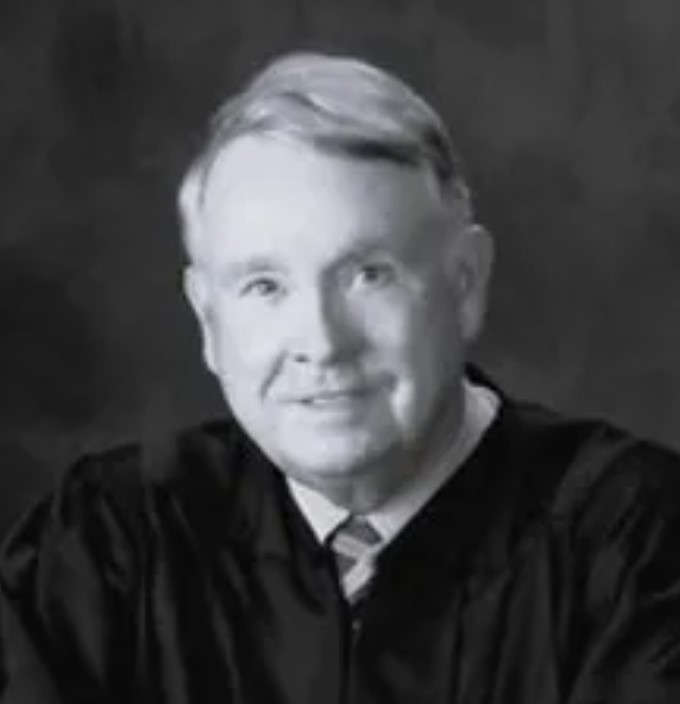 Hon. Daniel Dean Doyle, age 84, passed away peacefully with the love of his family surrounding him after a battle with Alzheimer’s and it’s resulting complications.

He was born in Lewistown, Illinois, to Bert & Josie Doyle. Josie was a homemaker and Bert was a factory worker at Caterpillar. To supplement the family’s income, Bert and Josie built modest homes along with their son, living in them as they built them, and then selling them once they were completed. Dan helped his parents with these projects mixing mortar, hauling bricks, and learning valuable carpenter and general building skills. Bert was also an avid inventor and created several contraptions for his son Dan, such as a circular rotating swing made from a boat motor, a toy that thrilled Dan and his friends but terrified his mother.

Dan graduated from East Peoria High School and then attended the University of Illinois for both his bachelor’s and his law degree. He married Kirby Johnson, his girlfriend since high school, on August 29, 1959. He started his career with the FBI and spent several years working in the South in the midst of the Civil Rights violence and upheaval. During the March at Selma, Alabama, Dan was assaulted by a KKK member, the same KKK member who assaulted Martin Luther King, Jr. at a later point. In his time with the FBI, he met Martin Luther King, Jr, John Lewis, and J. Edgar Hoover.

Having honed his investigative skills at the FBI, Dan sought to worked in the legal system. That dream materialized in 1965 when Winnebago County State’s Attorney William Nash hired Dan to serve as assistant state’s attorney. He left for two years to work in private practice with Dan King and John McNamara (a future Mayor of Rockford), before then-State’s Attorney Philip G. Reinhard hired him to return to the state’s attorney’s office as Chief of the Criminal Division.

In 1976, with the help of his family and many supporters, Dan was elected State’s Attorney and served in that role for 12 years, handling major cases including murders, kidnappings, and home invasions. Dan went on to serve as a judge for 13 years, half of that time as a justice for the Illinois Appellate Court.

In his personal life, Dan had broad interests including acting in community theatre. In the early 70s, he played Clarence Darrow in Inherit the Wind with a local theatre group, and Atticus Finch in To Kill a Mockingbird at New American Theatre in Rockford in 1976. Dan also wrote and performed humorous musical skits for many years in the Legal Follies, a charity event held yearly to raise money for the non-profit Prairie State Legal Services. He loved offering advice and support to his two grandchildren who were involved in local community theatre and often encouraged a vaudeville slant to their auditions.

Dan was a committed St. Louis Cardinals fan as he played baseball as a pitcher through high school. Dan and Kirby also loved to travel, and they enjoyed many trips abroad as well as visiting much of North America and the U.S. Dan’s favorite activity was reading, and this love of reading lead to his final career move – writing fiction. Dan authored two legal thrillers, yet to be published, and a successful play called “Waste MisManagement,” which was performed to nine sold out performances at Pec Playhouse Theater in Pecatonica, IL, in 2012 and later for a community theatre in Louisiana, which Dan and Kirby attended in 2014.

To his family and in his professional career, Dan provided an exemplary role model for integrity and character. He was acutely dedicated to the balance of fairness and justice. He made all decisions with careful and thorough discernment. He placed great value on honesty and doing what was right. Dan was incredibly supportive and dedicated to his family. Dan also had a wicked sense of humor and loved to delight his family with unexpected outbursts of silliness. He was beloved by his children and grandchildren.

Dan is survived by his wife Kirby, his daughter Hilary Hofstetter (Tom), his son Brian (Darla), and his three grandchildren Jacob Hofstetter, Paige Hofstetter, and Emma Doyle and two step-grandchildren Nathan and Jonah as well as sisters-in-law Carla James, Carolyn Johnson, and Judy Johnson, and nieces Sarah (Tim) Schlegel and Kim (Randy) Spaw. He is preceded in death by his parents and his brother-in-law Larry Johnson.