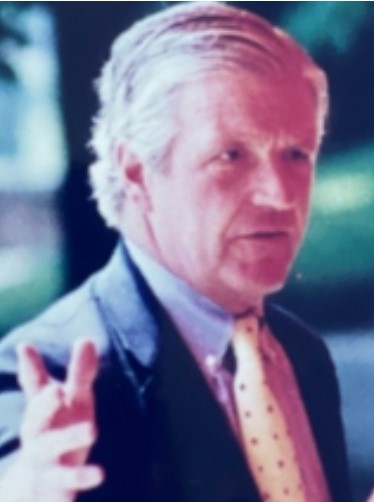 A longtime resident of Winnetka, IL, Bob attended Faith, Hope and Charity elementary school, and in his final weeks, he could still recite his classmates’ names – in alphabetical order.

From there, he attended Loyola Academy, University of Notre Dame (A.B.), and Harvard Law School (J.D.) before joining the law firm Baker & McKenzie where, for over 60 years, he was a major driving force of the global expansion of the firm it is today. A brilliant lawyer, Bob was best known for building a workplace culture of friendship. A source of great joy for him were the close and lifelong friendships that he shared with his partners from around the world.

A former chairman of the American Bar Association’s Section of Corporation Banking and Business Law, Bob also served as a member of the Legal Advisory Committee to the New York Stock Exchange and President of both the Legal Club of Chicago and the Law Club of Chicago.

A career highlight was successfully arguing one of the most consequential business law cases in the past century (Ernst & Ernst v. Hochfelder) in front of the U.S. Supreme Court.

In addition to his distinguished legal career, Bob had a deep and abiding commitment to pro bono and civic service. Baker & McKenzie annually bestows an award in Bob's name to the individual best reflecting the spirit of serving others through pro bono work. He was a Life Trustee of Catholic Theological Union which presented him its highest award, and a University of Notre Dame College of Arts and Letters Advisory Council Member. He was formerly President of the Catholic Interracial Council, Chair of the Legal Aid Society, and President of LINK Unlimited Scholars which honored him with its Martin Luther King Jr. Award. Never hesitant to support a good cause, he had a special affinity for the Democratic Party. Bob spent his life supporting social justice causes. Generous to a fault (although he would call that an oxymoron), he never turned down anyone who needed help.

Throughout his life, Bob was described as “the best, a great guy,” immediately followed by “and a truly good man.” He was infectiously cheerful, innately kind, keenly intelligent, genuinely self-deprecating, and a ton of fun. He was also a prodigious reader, did the NYT crossword puzzle daily, enthusiastically traveled around the world, rode his bike downtown to work, and when near a mountain, skied every day of the season. Well into his eighties, Bob took at least one ski run per day, so as not to break his streak.

A man of faith, he loved and never gave up hope in the Catholic Church, while at the same time acknowledging its flaws. He was a founding member of Chicago’s Catholic Jewish Muslim Dialogue Group, a longtime and active member of his parish council, and a stalwart supporter of progressive Catholic publications including America, Commonweal, and the National Catholic Reporter. Until his final days, he took to his knees each evening to thanks God for the life he’d been given. He was often heard saying, “I’m the most fortunate guy in the world.”

Perhaps most importantly, he will be remembered for his generosity of spirit because Bob always showed up. If it mattered to someone he cared about or was the right thing to do, he showed up. Every single time. Fundraisers, recitals, school events, funerals, parties, daily mass, he showed up.

Above all, he showed up for Sheila Reynolds Berner, his late wife and best friend of 64 years, and his children, their spouses, and his grandchildren who were his greatest source of immeasurable happiness and pride.

To his legions of friends and the many people he knew during his long life, it is they who feel great fortune to have known him. Tributes from people who loved and admired him filled a 200-page book created for his 90th birthday.

Virtually attend Bob's funeral mass on the church's website. (You must scroll down their page to view the live streaming at mass time.)

In lieu of flowers, memorials may be made to either: