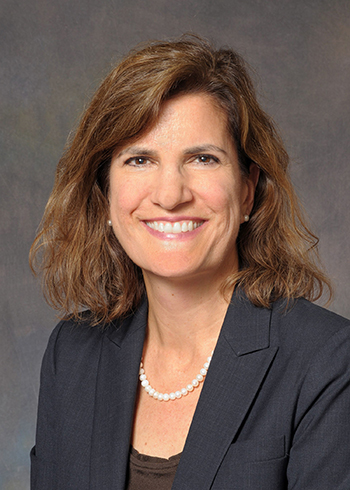 Marcia Meis was groomed for this position. Justice Mary Jane Theis refers to the new Director’s background: “She has been involved. She has experience in many layers of the system.” Chief Justice Lloyd Karmeier told me “she has the ability to move the court system forward, to stay ahead of issues, and see what issues are coming down the road.” Ms. Meis describes herself as someone who really likes critical thinking and analysis.

So, who is Marcia Meis? After receiving a journalism degree from the University of Missouri, she graduated from DePaul University Law School and passed the Illinois Bar exam. Brief experience with a small general practice firm handling family law and personal injury matters taught her that she “did not want a trial practice.”

She transitioned to clerking for various Appellate Court justices: Robert Cook in the 4th District, Michael Colwell in the 2nd District, and finally for Thomas Hoffman in the 1st District for three-and-a-half years. It was Justice Hoffman who suggested she apply for an attorney position at the Administrative Office. Justice Hoffman told me he recommended Ms. Meis for the position because “she is extremely bright and very thorough. Just what the Administrative Office needs.”

Ms. Meis interviewed and was hired as a staff attorney in 1999. She was Secretary to the Supreme Court Rules Committee; she did contract and lease review. She was involved in designing and starting the MCLE program. She was involved in bringing back EdCon, the every other year week-long education program for all sitting judges. She eventually was promoted to Chief Legal Counsel and then to Deputy Director in 2014. Through those promotions, she became more involved in policy issues and putting critical thinking to use with ideas to assist the Court. What she enjoyed most about the challenges was strategizing to achieve maximum positive effect to improve the court system.

She enjoys the challenge in statewide initiatives and the challenges in getting people used to new ideas. Finding the right way to communicate what will resonate with the stakeholders on any given issue.

Projects on her agenda include bringing civil e-filing to life statewide, the Judicial College. This is an especially difficult challenge in many rural counties downstate that lack the resources available in the urban areas.

Perhaps most important to her agenda are the necessary reforms to and improvement of pretrial practices in criminal matters. Among the reforms in pretrial practices is using evidence-based resources to provide bond court judges with solid information to assist them in exercising their discretion in determining whether a defendant should be released pending trial, retained in custody, or released with conditions. The goal is to detain defendants without bail for only a few offenses.

The Judicial College is not just for judges. It will include courses for judicial education, trial court administrators, probation officers, circuit clerks, guardians ad litem, and judicial branch staff. This will be enhanced training in those areas. It will not take the place of EdCon.

Also on the radar is a strategic planning process to develop a long-term plan to take Illinois courts long into the future. The goal is the help the court system evolve and remain relevant while maintaining access to justice.

On a more visible note, look for a newly designed and more user-friendly Supreme Court website in the coming months. 

Back to the November 2017 Newsletter