The newsletter of the ISBA’s Bench & Bar Section

In a summer move that caught many off guard, Illinois legislators passed Public Act 102-0011 changing the boundaries of the Illinois appellate court districts for the first time in over 55 years. The redrawn judicial district map was proposed by lawmakers on May 25th and swiftly signed into law by Governor J.B. Pritzker on June 4. The Illinois Supreme Court took immediate action with a June 7, 2021 order pausing the enactment of the redistricting to give courts adequate time to implement the changes. On December 8th, the Illinois Supreme Court issued a new order lifting the temporary pause effective New Year’s Day 2022. 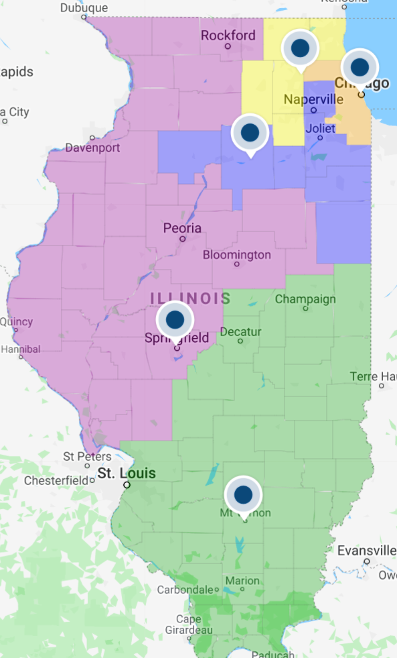 See map online at: https://www.illinoiscourts.gov/courts/appellate-court/appellate-court-di....
The court’s June 7, 2021 order was issued pursuant to the court’s general administrative and supervisory authority over the courts of Illinois conferred on this court pursuant to Article VI, section 16 of the Illinois Constitution of 1970 (Ill. Const. 1970, art. VI, sec. 16), as acknowledged by the Illinois General Assembly in Public Act 102-0011. The order paused the implementation of the new districts “in view of the numerous changes to the processing of appeals and the administration of the justice system in Illinois necessitated by Public Act 102-0011, including but not limited to, updates to e-filing and case management systems software, redistribution of staffing and judicial resources, and training of judicial stakeholders and education of the public and members of the bar; to give sufficient time to plan and implement such changes required by Public Act 102-0011, and to facilitate an orderly transition, avoid errors and guarantee access to justice; and recognizing that Public Act 102-0011 states that nothing in the Act is ‘intended to alter or impair the ability of the Supreme Court to fulfill its obligations to ensure the proper administration of the Judicial Branch.’” See June 7, 2021 Order In re: 2021 Judicial Redistricting M.R. 30858.

The court’s December 8, 2021 order not only set the effective date for the re-districting to take effect (January 1, 2022), but also answers some of the practical, procedural, and legal questions raised by the reshuffling of jurisdictions:

The new configuration of the appellate districts in Illinois has wide-ranging implications for Illinois judges, lawyers, and litigants. Actions pending in many different counties are now to be appealed to a different appellate court, but those trial courts are still bound by appellate court decisions from the “prior” district for cases filed on or before December 31, 2022. Appellate courts are also bound to follow the law of the case in subsequent appeals even if the prior decision is contrary to the law of the new district.

Back to the January 2022 Newsletter