The newsletter of the ISBA’s Section on International & Immigration Law 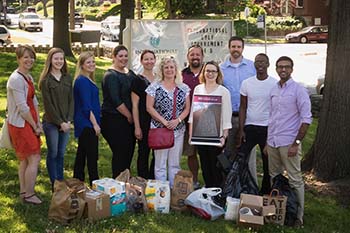 In my journey as a law student at Southern Illinois University School of Law, I have found that the best way to learn international law is to have a passion for understanding how the United States legal system interacts with foreign legal systems.

Summer 2016, was my first experience studying international law. I took a class in legal globalization and traveled to Cuba. My goals were to study Cuba’s health care and legal systems in comparison to the United States’ systems. The most interesting concept I learned was that Cuba does not have a tax system. In Cuba, businesses are nationalized by the government. However, as relations with the United States normalize and conditions improve, Cubans have been allowed to operate small private businesses. Currently, small business owners do not pay taxes, but as more Cubans see the value in owning a private business the Cuban government is considering the idea of making the business owners pay tax. Business owners are not happy about paying it. I spoke with a small business owner who said, “Cubans do not want to pay taxes because taxes are the devil.” The tax issue in Cuba is an ongoing development that I continue to monitor.

In January 2017, I studied international white collar crime in Sydney, Australia. A large sum of the money that is laundered out of the United States is electronically transacted through various countries until it is stopped in the Sydney banking system. The money is often destined to end its journey in China, unless it is caught by the United States’ Internal Revenue Service (IRS) in Sydney. The group I traveled with met with an IRS Special Agent Attaché who explained the significance of stopping various types of white collar crime in the global community. Interestingly, the agent discussed phone call scammers as a source of white collar crime. He explained how the IRS worked with the government of India to stop a warehouse of people from making calls to U.S. citizens claiming to be the IRS. The scammers would tell people that they owed back taxes and needed to pay immediately. Unsuspecting U.S. citizens, especially the elderly, paid large sums of money to the scammers.

While in Sydney, I also visited several accounting law firms. Topics discussed included fraud and embezzlement within large companies. Luckily, the Sydney trip was not all about legal education; the group found time to visit a nature reserve and pet wallabies and koalas.

In May 2017, my most recent international legal education adventure led me to St. Louis, Missouri, to the International Institute. The Institute is a refugee resettlement center that assists immigrants called “New Americans,” with housing, job placements, and skills such as English for beginners. I toured the facility with my asylum and refugee law class. I observed the newest New Americans conversing in groups of their own ethnic peers, while others who had been there longer flowed freely among the masses. Being at the International Institute was an eye-opening experience in what it means to be an American. Many of these people come to the United States as refugees persecuted on account of race, religion, nationality, membership in a particular social group, or political opinion. Most Americans think immigrants come from war torn areas in the Middle East. However, the truth is— they come from everywhere. New Americans are from Central and South America, Africa, Russia, China, and every country that have such persecution of citizens.

My studies in international law included submitting papers and completing skills-based paperwork, such a mock application for asylum. Overall, studying international and comparative law is a lot of work, but also, an adventure. 

Sheena L. Hart is a third-year law student at Southern Illinois University specializing in International and Comparative Law. She has served as a board member for the SIU International and Immigration Law Society for two years. She is a student member of the Illinois State Bar Association. She may be reached at slhart2s@siu.edu.

Back to the August 2017 Newsletter