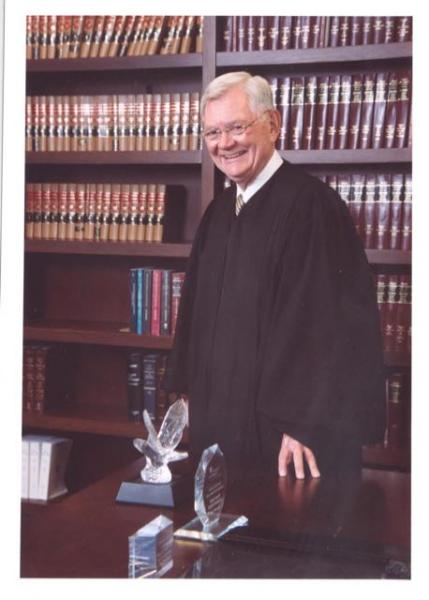 Justice Thomas R. Fitzgerald, who retired from the Illinois Supreme Court in 2010 after a long and distinguished career, passed away Sunday at his home. He was 74.

Justice Fitzgerald's 34-year judicial career was marked by duty, grace, innovation, and an unparalleled dedication to advancing the quality of justice for those he served. He was a model for integrity.

"Having joined the court shortly after his election in 2000, I had the privilege of serving with Justice Fitzgerald for a decade," Chief Justice Rita B. Garman said. "Before we both arrived on the Supreme Court, Justice Fitzgerald and I had known each other for almost 30 years – ever since we both became rather young members of the judiciary."

"Over the many years, he never changed. He was a warm and caring person, and even when on the bench, his demeanor revealed his genuine concern about the people who appeared before him. Tom Fitzgerald was dedicated to serving the people of Illinois and to making the judicial system as fair, efficient, and accessible as it could possibly be."

In addition to being a fine jurist, Chief Justice Garman said Justice Fitzgerald shared his gifts with others by teaching lawyers and other judges at numerous educational programs.

"He was also a true scholar of the life and work of Abraham Lincoln and a devoted man of faith," Chief Justice Garman added. "The people of Illinois were privileged to have Thomas Fitzgerald as a member of the Illinois Supreme Court for a decade, and I was privileged to be his colleague and friend."

Whether it was on the Cook County Circuit Court or the Supreme Court, Justice Fitzgerald was known for serving with integrity. His decision to step down from the bench on October 25, 2010, showed just that.

In announcing his retirement, Justice Fitzgerald said he had received a confirmed diagnosis of Parkinson's disease and while he was fully capable of discharging his duties at the time, he "didn't want to do anything to hurt the Court or the people it serves."

"Justice Thomas Fitzgerald often said the moral authority of the Courts is based on the public's trust and confidence in the integrity of the judiciary," Justice Mary Jane Theis said. "He was deeply affected by the Greylord Scandal and he devoted his extraordinary judicial career to healing that grave breach of trust. His commitment to the highest standards of judicial conduct, in the trial Courts and on the Supreme Court, inspired generations of judges."

Justice Theis was one of the many judges inspired by Justice Fitzgerald and was appointed to fill the remainder of his term on the Supreme Court after he retired.

"Just before his retirement Justice Fitzgerald presided over the impeachment trial of former Governor Rod Blagojevich," Justice Theis said. "It was fitting that in a time of crisis in the State of Illinois, he was the very public face of integrity, and his dignity and wisdom provided confidence in the proceeding.”

Justice Anne M. Burke said Justice Fitzgerald's passing is a great loss to the Court family, as well as to the entire legal community.

"Justice Fitzgerald was an outstanding legal professional and jurist, as well a wonderful friend," Justice Burke said. "We will greatly miss him."

Born in 1941, Justice Fitzgerald grew up on the South Side of Chicago. He attended Loyola University Chicago before enlisting in the U.S. Navy. Following his tour of duty, Justice Fitzgerald, the son of a circuit judge, graduated with honors from The John Marshall Law School.

After a stint as a prosecutor in the Cook County State's Attorney's Office, Justice Fitzgerald was elected to the Circuit Court bench in 1976, becoming the youngest elected circuit judge in Cook County.

Justice Fitzgerald served as a trial judge in the Cook County Criminal Court from 1976 to 1987, when he was assigned Supervising Judge of Traffic Court following the Operation Greylord scandal. He was credited with cleaning it up and instituting a number of innovative reforms.

Justice Fitzgerald returned to the Criminal Division as Presiding Judge in 1989 and created an evening Narcotics Court to help drug addicts receive treatment and to relieve jail overcrowding.

In 1999, Justice Fitzgerald was appointed by the Supreme Court to serve as chairperson of the Court's newly-formed Special Supreme Court Committee on Capital Cases. Under his leadership, the Committee drafted pioneering rules to improve the quality of justice in the trial of capital cases, including a requirement that death penalty cases only be tried by Court certified attorneys.

"Tom was always ready to take on the tough assignments," Justice Lloyd A. Karmeier said. "He was called upon to reform traffic court after Greylord, and he did. When problems became apparent with how the courts were handling death penalty cases, he led the way in formulating and implementing reforms as Chairperson of the Special Supreme Court Committee on Capital Cases."

Justice Karmeier added, "His contributions to the integrity of the court system were profound and invaluable. Tom brought his intelligence, his knowledge of the law, and his compassion for all to the bench. His passing is a true loss."

In 2000, Justice Fitzgerald was elected to the Supreme Court for the First Judicial District and in 2008, was unanimously chosen by his colleagues to be Chief Justice, a position he served in until his retirement.

Justice Thomas L. Kilbride joined the Supreme Court the same year as Justice Fitzgerald and succeeded him as Chief Justice.

"He was a judge’s judge, a stand up guy who had a tremendous reservoir of judicial wisdom," Justice Kilbride said.

When he became Chief, Justice Fitzgerald pledged to always "strive to do the right thing," and "to make a very good judiciary even better."

Based in part on his belief that public confidence in the court system was vital to ensuring judicial independence, Justice Fitzgerald spearheaded initiatives to enhance the performance of the judiciary, including a requirement that all of the state's trial judges participate in a confidential performance evaluation program.

The Supreme Court, during his tenure, also expanded a judicial mentoring program, crafted new rules clarifying the authority and expectations of Chief Circuit judges and Appellate Court presiding justices, and codified existing evidentiary law in Illinois in a single source.

Justice Fitzgerald was an advocate for the use and proper funding of probation.

He explained the need for probation services as a viable tool for rehabilitation during his budget requests to the legislature. When his pleas were not met for two years, Justice Fitzgerald wrote to the Governor and successfully sought the restoration of funds to the Court's budget for probation services.

Justice Fitzgerald's dedication to the law and legal community earned him numerous awards over the course of his career.

In 2008, he received the prestigious John Paul Stevens Award, which celebrates Illinois attorneys and judges who have demonstrated extraordinary integrity and service to the community. In 2010, Justice Fitzgerald was named the Chicago Lawyer's Person of the Year.

Outside of the legal profession, Justice Fitzgerald was a devoted White Sox fan and a founding member of the Nellie Fox Society, which worked to get the late second baseman Hall of Fame honors.