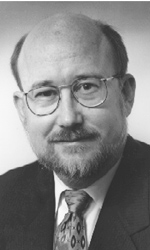 Kimball R. Anderson, a senior partner in Winston & Strawn, graduated first in his class of 1977 at the University of Illinois College of Law and joined the law firm that year. He passed the CPA examination on his first try after earning an undergraduate degree in political science in 1974. Under Anderson's leadership during the past 20 years, Winston & Strawn's pro bono program has been honored as a model for the profession. His efforts have been recognized with an American Bar Association Pro Bono Publico Award, and the Federal Bar Association and U.S. District Court honored him two years in a row with Excellence in Public Interest Awards. General counsel for Winston & Strawn since 2000, Anderson has chaired the firm's Audit Committee and Ethics Committee. He has been loss prevention and claims counsel since 1990 and a member of the Sarbanes Oxley Act Compliance Committee for two years. Anderson was chosen Chicago Lawyer magazine's Person of the Year in 1996 for a distinguished career in public interest endeavors that includes representation of death row inmates, exoneration of the wrongfully convicted, a Supreme Court challenge to federal habeas corpus procedures, and representation of the homeless. Currently president-elect of the Chicago Bar Foundation, Anderson is first vice president of the Public Interest Law Initiative and chair of the DePaul University College of Law Center for Justice in Capital Cases. He has taught trial advocacy as an adjunct professor at the Northwestern University School of Law for a decade. 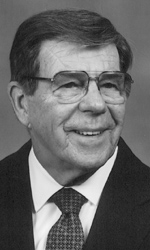 Joseph R. Bartylak of Alton joined the staff of the Land of Lincoln Legal Assistance Foundation when it was founded in 1972. He had been staff attorney of the Legal Services Society of Madison County, one of seven organizations that combined to form LLLAF. Bartylak became the agency's executive director in 1976 and served for 27 years. He was at the helm while Land of Lincoln expanded into 65 southern Illinois counties and established several regional offices throughout its 33,000-square-mile service area. A 1947 graduate of the Washington University School of Law, Bartylak has been an advocate for legal services to the poor for most of his 58 years in practice. He retired from Land of Lincoln in 2003, but continues to serve the profession as the first downstate associate director of the Lawyers' Assistance Program. A past president of LAP who has served on its board for 25 years, Bartylak is a member of the ISBA Assembly and a past chair of the Committee on Delivery of Legal Services and the Committee on Public Relations. He is a Charter Fellow of the Illinois Bar Foundation, a trustee of the Illinois Coalition for Equal Justice, and a past president of the Madison County Bar Association. Bartylak has received the Charles Dorsey Award from the National Legal Aid and Defender Association, the Lovejoy Human Rights Award, a Distinguished Service Award from the Lawyers Trust Fund of Illinois, and the Carl H. Rolewick Award from the Lawyers' Assistance Program. 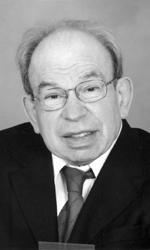 Lionel I. Brazen, during his 55 years in practice in Cook County, has been well known as a watchdog for his legal challenges to discriminatory surcharges on filing fees and an attempt to require attorneys to sign affidavits of ethical compliance. A former member of the ISBA Board of Governors who served on the Assembly for several years, Brazen has chaired the Elder Law Section Council and General Practice Section Council, and was editor of the General Practice newsletter. He also served on the Illinois Bar Foundation board and is a Fellow of the foundation. Among the honors Brazen has received are the ISBA General Practice Tradition of Excellence Award in 1995 and the American Bar Association Sole Practitioner of the Year Award in 1988. He has been a panel attorney for the Federal Defender Program. A past president of the North Suburban Bar Association, Brazen is a former counsel to the Midwest chapter of Sierra Club and the Midwest division of Friends of the Earth. A Fellow of the American Academy of Matrimonial Lawyers, he has served on the Chicago Bar Association Matrimonial Law Specialization Panel. A 1950 graduate of the University of Illinois College of Law, Brazen practiced in downtown Chicago for more than a half-century before relocating to Skokie. Academy Laureate Warren Lupel, who nominated him for this year's class, noted that "In his various roles, he has mentored literally scores of young lawyers on achieving goals with integrity, honor and service to the profession." 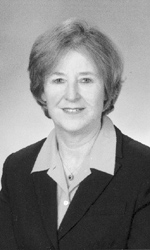 Diane C. Geraghty, a faculty member of the Loyola University School of Law since 1977, has served as acting dean of the law school since Nina Appel stepped down last year. She is the founding director of Loyola's unique Civitas ChildLaw Center. A nationally known authority on juvenile justice, Geraghty was the principal drafter of the Illinois Supreme Court Juvenile Law Benchbook. She has worked with the Collar County Juvenile Judges Association on amendments to the state Juvenile Court Act. Geraghty has chaired the Citizen's Committee on the Cook County Juvenile Court and the Illinois State Court Improvement Project. She was designated a Juvenile Justice Pioneer in 2000 for her contributions to the court's improvement. Federal funds that she helped obtain have seeded such innovative statewide programs as Court-Appointed Special Advocates (CASA). A former member of the ISBA Child Law Section Council, Geraghty serves on the board of the Chicago Children's Advocacy Center. A past president of the Illinois chapter of the American Civil Liberties Union, she has served on the national board and was counsel to the Roger Baldwin Foundation for 15 years. Geraghty is a 2001 recipient of the Livingston Hall Award from the American Bar Association. She and her husband, Thomas Geraghty, who was inducted as an Academy Laureate in 1999, received the Leonard Jay Schrager Award from the Chicago Bar Foundation in 2003. u A 1972 graduate of the Northwestern University School of Law, Diane Geraghty has a master's degree from the University of Chicago. 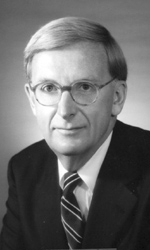 Thomas S. Johnson of Rockford, a senior partner in Williams & McCarthy, was the founding chancellor of the Academy of Illinois Lawyers in 1999. A 1967 graduate of Harvard Law School, he has spearheaded countless initiatives of the Illinois bar, and has received the ISBA Award of Merit. Among the state bar entities Johnson has chaired are the Committee on Lawyer Referral Service, Committee on Delivery of Legal Services, Task Force on Education Bigotry, Special Committee on Lawyer Advertising, Task Force on Governance, and most recently, the Committee on Supreme and Appellate Court Election Tone & Conduct. Johnson was co-chair of the joint Chicago Bar-Illinois State Bar survey of unmet legal needs of the indigent in 1989 that resulted in recommendations to provide better access to the legal system. He testified for the American Bar Association in access to justice hearings of the Senate Judiciary Committee, and chaired the National Conference on Legal Services and the Public. A past president of the Winnebago County Bar Association, Johnson has served on the ISBA Board of Governors and Assembly, and the ABA House of Delegates. He is a past chair of the Illinois Institute for Continuing Legal Education, and a Charter Fellow of the Illinois Bar Foundation. Johnson chaired the board of trustees of Rockford College, which conferred on him an honorary doctorate of humane letters in 1989. He is a trustee of Eastern Illinois University and a member of the board of governors of Regents College in London. 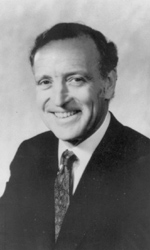 Eugene I. Pavalon of Chicago, senior partner in Pavalon, Gifford, Laatsch & Marino, is a past president of the Illinois Trial Lawyers Association and the Association of Trial Lawyers of America. He has been president of the Roscoe Pound Foundation (and a Lifetime Fellow), and Trial Lawyers for Public Justice, which he helped found. Pavalon served on the ISBA Civil Practice and Procedure Section Council and chaired the Committee on Interprofessional Cooperation. A former member of the Chicago Bar Association Board of Managers, he is a past chair of the CBA Civil Practice Committee and the Committee on Aviation Law of the American Bar Association Section of Litigation. u Pavalon is a Charter Fellow of the Illinois Bar Foundation and a Fellow of the American Bar Foundation, American College of Trial Lawyers, International Academy of Trial Lawyers and International Society of Barristers. He is a member of the Inner Circle of Advocates and a Diplomat of the American Board of Professional Liability Attorneys. u A 1956 graduate of the Northwestern University School of Law, Pavalon has taught trial advocacy at the law school since 2001. He has served on the faculty of the College of Advocacy of both ITLA and ATLA and is a member of the Illinois Supreme Court Committee on Civil Discovery Procedures. u Pavalon has received the Leonard M. Ring Lifetime Achievement Award from ITLA, the Harry M. Philo Award from ATLA, the Champion of Justice Award from Trial Lawyers for Public Justice, and the American ORT Jurisprudence Award. 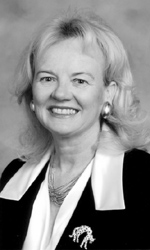 Carol Hansen Posegate of Springfield, a partner in Posegate & Denes since July 2000, participates in a variety of community initiatives in addition to legal activities that include service on the Illinois Supreme Court Committee on Professionalism. u Posegate is an elected trustee of Lincoln Land Community College, chair of the Memorial Medical System Child Care Board and member of the Medical Center board, and a past president of the Visiting Nurse Association of Sangamon County. She has chaired the Sangamon County United Way board and its fund-raising campaign. u An appointed member of the U.S. Judicial Conference Advisory Committee on the Federal Rules of Civil Procedure from 1991 to 1997, Posegate has served on the editorial advisory boards of Jaes Publishing (Handling Federal Discovery) and LRP Publications (Federal Discovery News). She is a member of the Lincoln-Douglas Inn of Court and an honorary member of the Million Dollar Advocates Forum. u A 1973 graduate of the Georgetown University Law Center, Posegate is an adjunct professor of legal medicine at the Southern Illinois University School of Medicine. She has been a U.S. Department of Justice trial attorney in both the Court of Claims and General Litigation Sections. u Posegate was legal advisor to the chair of the Illinois Commerce Commission in 1978, when she joined the firm of Giffin, Winning, Cohen & Bodewes and subsequently became a partner. She was counsel to Argonaut Great Central Insurance Co. and Grinnell Mutual Reinsurance Co., and remains counsel to the Illinois State University board.